Home / News / Our Blog / Why all local authorities and homelessness charities should pledge to support, not deport people sleeping rough

Why all local authorities and homelessness charities should pledge to support, not deport people sleeping rough 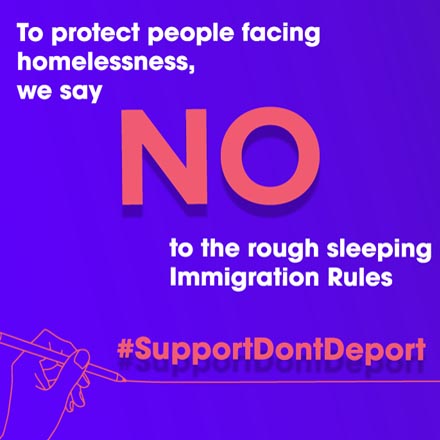 New UK Home Office rules have made rough sleeping grounds for refusing or cancelling a person’s leave to remain in certain circumstances. Fiona Colley, Director of Social Change at the national homelessness membership charity Homeless Link, discusses why local authorities and charities must send a clear signal by standing against this policy and for support-led solutions.

In 2017, the Home Office designated rough sleeping as an abuse of EU freedom of movement rights. The High Court ruled the policy illegal later that year, but many frontline workers still speak of how the fear created amongst people facing homelessness outlived the actual legislation. People facing homelessness are often reliant on informal information flows where detail and nuance is lost. What they hear is that accessing support could put someone at risk of deportation. Frontline workers said the climate even led to non-EU nationals, who weren’t affected by the legislation, becoming hesitant to access homelessness support.

Now, four years down the line and emerging from one of the most trying times in recent history, we are facing a very similar problem. In October 2020, without consulting the homelessness sector, the Home Office made changes to Immigration Rules, making rough sleeping grounds for refusing or cancelling someone’s leave to remain within the UK. Following widespread opposition from the homelessness sector, the Home Office published new guidance in April this year to make it clear that these new powers can only be used if ‘a person has refused repeated offers of suitable support and engaged in persistent anti-social behaviour’.

Homeless Link is the national membership body for frontline homelessness agencies, representing over 890 organisations across England. Despite the guidance, we fear that if local authorities and charities don’t send a strong message on this issue, it could prevent some of society’s most vulnerable people from accessing support. Information about the nuanced categories of those affected is unlikely to be understood by many on the ground, while uncertainty and distrust in services spreads quickly. We are already hearing from some of our members that people are more reticent to access support for fear of being passed on to the Home Office. As a spokesperson from Bristol City Council said, “committing to the Support don’t Deport campaign shows that we do not want anyone experiencing homelessness to be put off from seeking the help they need from the services provided by the council and our partners as a result of these rules.’’

Many in the sector are also concerned about the subjectivity of the revised guidance. In many cases, people sleeping rough have experienced significant trauma in their lives. As a result, they often have multiple, complex needs such as mental health issues and issues with drugs and/or alcohol. This can make it hard for people to engage with services and take up offers of support. As Amanda Croome, CEO at the Booth Centre, a community centre for people experiencing homelessness in Manchester, said: “Support rather than enforcement is what will end rough sleeping and we need immigration rules which enable us to do this.”

There are also concerns that the new rules will negatively impact victims of modern slavery. Many, through no fault of their own, have complex immigration issues and can end up living on the streets. In December, a coalition of 150 charities, trade unions, lawyers and local authorities wrote to the Home Office, raising concerns that “the new rules are likely to affect both victims before they have been identified and those facing homelessness or destitution after being confirmed as victims.”

That’s why we are asking all local authorities and charities who regularly support people experiencing rough sleeping to come together and sign our pledge to support, not deport people sleeping rough, promising not to make referrals under the new rules and endeavour to provide support-led solutions to all people experiencing homelessness. 119 organisations have already signed the pledge, including local authorities, homelessness charities and drug and alcohol treatment charities, but this is still only a fraction of the sector as a whole. Together we need to send a clear message, loud enough to be heard by all, that people coming forward for support will only ever be met with compassion, never a punitive response. As David Ireland, Chief Executive of World Habitat, said when he signed the pledge, “being homeless and in need of housing and support is not a crime, and deporting non-UK nationals is inhumane.”

Over the past year and a half, the homelessness sector has achieved unbelievable things through working together. As we start to leave the pandemic behind, we must continue in this vein, putting the wellbeing of people experiencing homelessness above everything else.

Homeless Link is asking local authorities and charities to sign the #SupportDontDeport pledge. A pledge form, policy briefing and model council resolution is available on their website.