Home / News / Our Blog / Mobilising the community to find solutions

Mobilising the community to find solutions 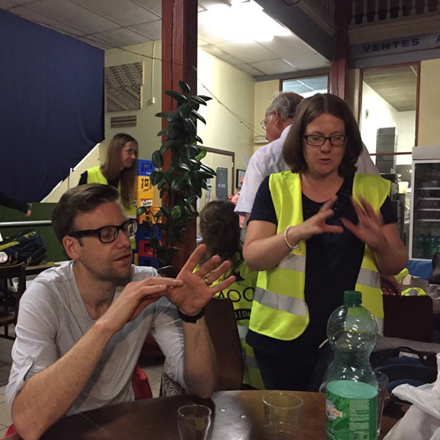 Dave Robinson (pictured  left) is the Area Manager for Central and Community Services at  Evolve Housing+ Support based in Croydon, London. Croydon is one of the cities working to end homelessness as part of our European End Street Homelessness Campaign.  In June he travelled to Brussels to take part in and learn from their Connections Week.  Croydon are currently planning their second Connections Week to be held in August 2017. Here he shares his thoughts on his time in Brussels.

As we get ready to deliver our second Connections Week[1] in Croydon next month (as part of our local campaign CR Zero 2020), I headed to Brussels to see another member city from the European End Street Homelessness Campaign in action.

According to Infirmiers de Rue, the organisation co-ordinating the local campaign in Brussels, between 400 and 700 people are sleeping rough every night. However, the most alarming statistic for me was that 72 homeless people died on the streets of Brussels in 2016, with many of the deaths amongst people in their 20s and 30s – young people with dreams and aspirations that will sadly never be fulfilled.

When I arrived in Brussels I headed straight to the meeting hub and was immediately struck by the energy in the room and the eagerness of all the volunteers to get started. Undeterred by my long forgotten GCSE French, I politely nodded and applauded along as the shift leader issued a rallying cry to the volunteers, the perfect way to start the evening. As we headed out into the early evening rain, with our surveys, clipboards and wearing our branded fluorescent jackets, I began to find out more about the volunteers and their motivation for getting involved. There was a tremendous diversity amongst the volunteers – men and women, young and older, but all driven by a desire to do something about a very visible issue in their city. Amongst the various professions represented on the two nights, I was out with a lawyer, a psychiatrist and a comic strip writer – most definitely not the traditional cast of usual suspects called upon to find solutions to the issue of street homelessness.

Given the number of transient migrants on the streets of Brussels, the co-ordinators had taken the decision to survey only those committed to remaining in Belgium. An Egyptian man, who we met alongside a Syrian in a park, told me of his desire to reach England, describing a hopeful world of family reconnection and increased opportunity. He would be making another ‘attempt’ soon but for tonight it appeared he would once again be sleeping in what, by that point, was a pretty sodden park.

One person I am unable to forget was an older woman – at least in her 60s – sleeping under a railway bridge close to the central station. Tragic enough in itself of course, but she only spoke Italian, and despite the range of languages spoken amongst the volunteers, Italian was not one of them. There was nothing more we could do at that point but make a note and hope that we would be able to speak to her on another evening. A female pensioner, who does not speak the language, sleeping under a railway bridge in northern Europe in the 21st century.

In the final hour of the final day, we met an older bearded man at a bus stop. Initially reluctant to complete a survey, he eventually agreed, thanks to the gentle encouragement of the volunteers and a homeless man who had earlier completed a survey.  Joanne, our team leader, was delighted to be interviewing this individual, as she informed me that he was someone the outreach team had been trying to speak to for a couple of years without success. Demonstrating the power of the campaign to make a real difference, the man even agreed to be photographed and was readily engaging with all of us by the end of the evening.

I came away from Brussels with a strengthened belief in the power of the campaign to engage homeless people and mobilise the community to find solutions. All of the volunteers I spoke with described how the campaign had increased their understanding of the issues rough sleepers face, and that the survey week had motivated them to work together with the rest of the community to tackle this issue. By the final evening, with some volunteers completing their third shift in a row, around 300 surveys had been completed. Brussels will certainly have a large amount of data to consider as it looks towards the next steps.

In Croydon, after our Connections Week in August 2016, we formed a ‘Solutions Group’ which includes concerned citizens, third-sector organisations, housing and health departments and faith-based groups. In this group, we look at breaking down the barriers that prevent people from permanently moving off the streets and into secure accommodation. We meet every two months and have developed ‘task and finish’ groups committed to challenging ‘the system’. The five work streams are: implementing a Housing First service, Croydon Council system changes, policy and influence, health, and supported housing. We have also formed an online forum for all updates to be shared. Each group is led by a member of the steering group and contains volunteers and members of the community.

In August 2017, as part of our involvement in the European End Street Homelessness Campaign, we are running a local Connections Week 2.0 to survey Croydon’s rough sleepers one year on. As we seek to increase involvement from across all groups in Croydon, my experience in Brussels reminded me of the power of volunteer involvement and the impact that the community working together can have.