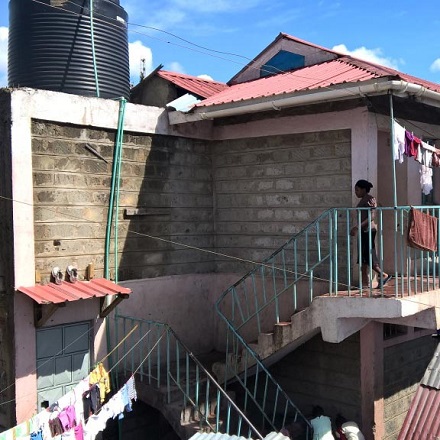 A hundred years ago it was thick with trees

In the Nubian “Nobiin” language Kibera means forest. A hundred years ago this small area five kilometres from the centre of the Kenyan capital, Nairobi was thick with trees. It lay next to the British colonial King’s African Rifles military encampment where Nubian soldiers conscripted from Sudan were based. No doubt to avoid having to pay them properly, the military authorities allocated plots of land in the forest to the soldiers in return for their service. Over time the Nubian soldiers moved on and rented out their plots to others seeking a better life in the growing city of Nairobi. Kibera grew and grew. It became the gateway to Nairobi for the poor migrating to the city. As space became short, the trees disappeared, and the houses became smaller and more densely packed.

Today it’s one of the largest slums* in the world 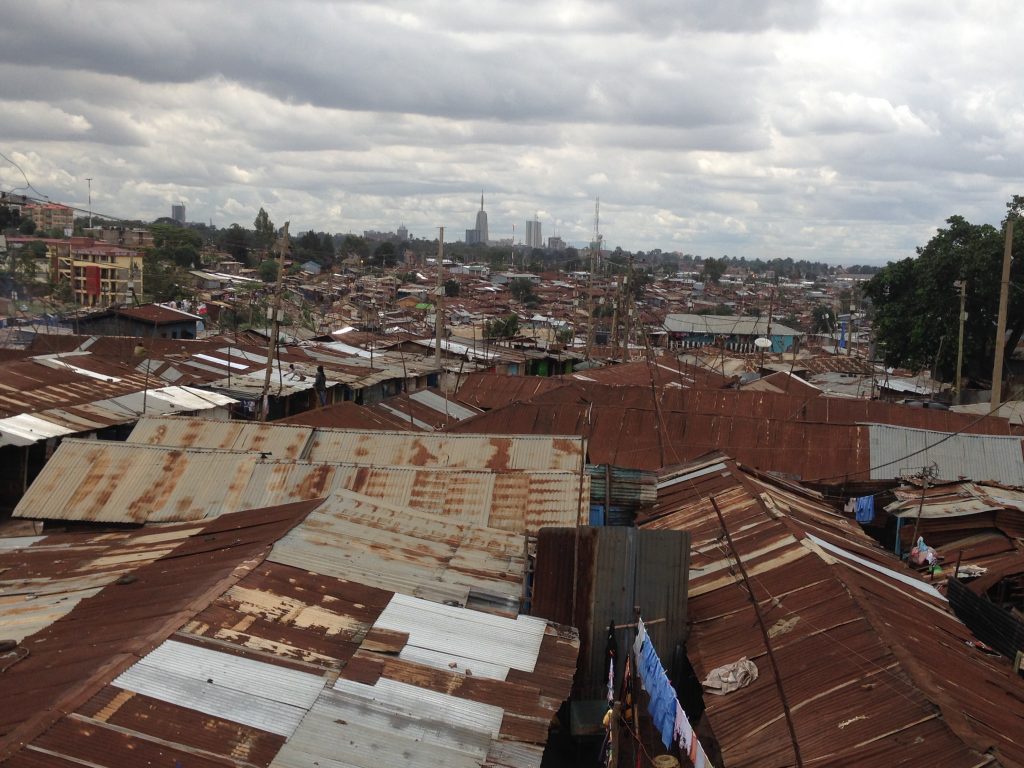 My senses confronted me with two thoughts when I first entered Kibera. My eyes and ears told me that this has got to be the most entrepreneurial place on Earth. But my nose told me that it had got a serious sanitation problem.

Nowadays Kibera has the dubious honour of being one of the largest slums in the world. Nobody knows for sure how many people live there. Estimates range from 200,000 to two million. Umande Trust put it at around half a million. Whatever the number, the density of humanity is extraordinary. In two square kilometres there are enough people to populate a medium sized city. And it’s not just in Kibera; 60% of Nairobi’s population live in slums, but they occupy less than 6% of the city’s residential land.

With so many people in such a small space, Kibera inevitably feels busy; very busy. Few of the roads are wide enough for cars, but there are throngs of people everywhere. People carrying unfeasibly large sacks of goods, people pulling handcarts, the occasional motorbike and a scattering of chickens. Buildings are not just houses, they double up as a shop, a workshop, a kitchen or an office.

No opportunity for commerce is missed. There are stalls selling second hand clothes, fruit, vegetables and household utensils, workshops welding together bars of scrap metal to make bed frames. People who live here might not have much money, but there are so many of them that it’s possible to make a living out of selling a lot of things for tiny amounts of money.

Compared to other parts of Nairobi, Kibera is cheap. Umande Trust report that monthly rents start from about $10 for a house. But with some residents on incomes of $1 a day, that’s still a significant expense. The Kenyan government retains overall ownership of the land, but layers of sub-ownership rights lie underneath. 90% of Kibera’s population rent from remote, often-anonymous landlords. Tenants have virtually no rights. Indeed the first area we visited on the northern fringes of the slum was the site of a planned new highway. People in its path had been told they would have to leave. They had not been promised relocation or compensation. 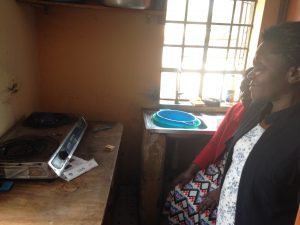 There have been numerous attempts to demolish Kibera. The Kenyan government has passed laws that seek to regulate the construction and planning of houses. Nothing in Kibera remotely meets the rules. Most houses are simply boxes made from sheets of corrugated steel and a few bits of timber to support them. The floor is bare earth, There are no windows and just one door. The average size is about 8m2. Household sizes vary, but it is not uncommon for a house to be a home for eight people.

At night Kibera is plunged into semi darkness. Electricity has arrived to some parts of the slum in recent years, but it is unaffordable to most people. Until recently there was no running water, but some pipes have been installed in the last few years, although there are reports that the water is heavily contaminated. Most people buy water that is carried into the slum in water containers on carts. Fuel is expensive and unaffordable to many people. Better off families use Kerosene, the less well-off burn charcoal or wood. The air pollution it creates is choking.

But perhaps the greatest threat facing people living in Kibera is disease. With no sanitation or proper water supply system the risks of infection are high. Cholera and typhoid are common. The proximity of so many people and the difficulty in keeping clean means that disease can whip through communities here like a wild fire. Inevitably it’s the young and the old who are most at risk. Houses don’t have their own bathrooms and so most people use communal latrines that are provided by their landlords for a charge. They are basic, usually filthy and often in disrepair. There are no handwashing facilities or toilet paper. Effluent is captured in a pit that needs to be emptied by hand. Sometimes it overflows; often it ends up being poured into the river. Many people can’t afford the charge and instead use what are locally called “flying toilets”. This means defecating in a plastic bag and throwing it away. The ground in some areas of Kibera is essentially made up of the outputs of this approach. 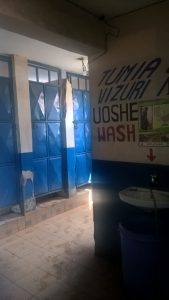 Umande Trust is based in Kibera and provides help to eight slums in Nairobi and beyond. Umande is the Swahili word for dew, which implies something new and clean. It has built nineteen biocentres in Kibera. These tall brick buildings stand high above the single storey shacks. They are community centres where people can come to get clean water, use a proper functioning toilet and get a warm shower. There is a small charge for these facilities, which is paid in cash or through a phone based financing system called Mpesa. Effluent from the facilities drains into a large underground tank built under each building. Microorganisms in the effluent anaerobically digest the sewage in the tank. The fermentation process gives off a biogas that is rich in methane. The gas is piped into a community kitchen located elsewhere in the building, where it is available for people to come and cook. In some centres the gas is bottled and sold as a clean fuel to replace kerosene or charcoal. The only bi product of the process is a dark solid organic material that the microorganisms cannot break down. It has to be cleaned out of the tank about once a year. The digestion process kills off the harmful bacteria and viruses so the matter is harmless but rich in nutrients and is sold as fertilizer for crops. 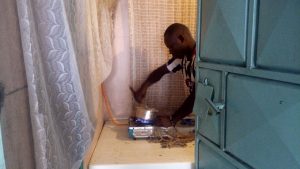 Like the rest of Kibera’s economy, biocentres operate on the basis of lots of customers and very small fees. The proceeds generate healthy surpluses which are invested in the community by an impressive system of local governance. Each biocentre has a locally elected committee that decide how the centre is managed and where the proceeds will be spent. In one centre we visited the priority was premier league football. The upper floor was a large television room where people watched the latest matches. It was adorned with team pictures of Chelsea, Arsenal and Manchester United. (Leicester City was sadly absent). In others there were homework rooms for school children and internet cafes. In the last biocentre we visited we were in for a surprise. As we entered the top floor room, we were greeted by a dozen slightly sheepish looking young men placing bets over the counter for the afternoon’s football matches.

The community had decided that what it needed was a betting shop, the rent from which funded community projects around the neighbourhood. 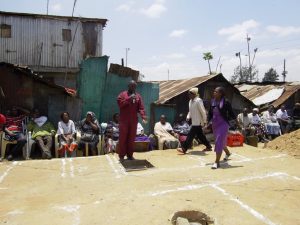 In 2000 the United Nations adopted a set of eight ‘Millennium’ goals to improve the lives of the poorest people of Earth. One of those goals aimed to “halve the proportion of the population without sanitation.”

Between 2000 and 2015 an incredible 2.1 billion around the world were provided with sanitation for the first time. But still much needs to be done. The United Nations estimates that 946 million people still practise open defecation. The cost of solving this seems unimaginable, until you start thinking about human waste like Umande Trust do. Where else would faeces be seen as a business opportunity? Or a means of funding community facilities, or even the means to satisfy your craving for football? But then where else on Earth is like Kibera?

*Slum in this instance is how Kibera is commonly described.