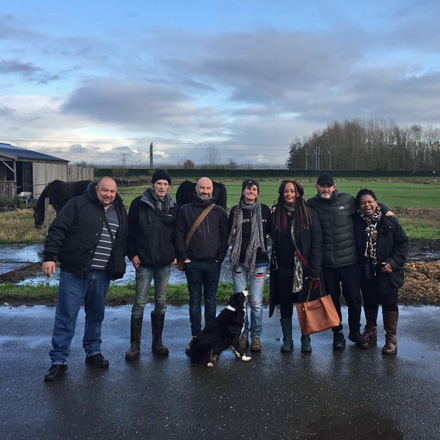 First, we met Carl at Lindehoff, a working farm providing work opportunities for people with experience of homelessness. Carl has part-time work there and showed us around the poly-tunnels which grow high-quality produce for some of the best restaurants in Amsterdam – we were even given an impromptu tasting! He told us about his journey from the UK to Amsterdam, how he became homeless and the difference having permanent accommodation and support from Discus has made to his life.

We met Marcel in his home, where he’s been living for 10 years. He explained that after he moved in it took him seven months to accept that he now had a permanent home – a poignant reminder of how difficult the transition away from homelessness can be. Originally from Suriname, Marcel visits his mother and extended family there regularly and has used their support to address long-standing issues in his life. Marcel advised us not to rush the people we support, reinforcing the need for support to be provided for as long as the person needs it – advice we will be applying to all our future work.

Finally, we met David who has been living in his flat for four years. He eloquently described the different choices having permanent accommodation had allowed him to make in his life. He discovered that his friends were the people who respected him and his neighbours. He realised he no longer needed to go to parties and stay until the end as he could go home whenever he wanted. He also discovered a love of clothes he did not know he had and proudly showed us his impressive collection. David advised us that whenever we arrange an appointment for a person, we should ‘check, check and check again’ to ensure that they are not inconvenienced or let down.

We also visited various community projects including a hostel providing both short and long-term accommodation; MDHG, a member-led organisation that advocates for the rights of people who use street drugs; and a government funded ‘Heroin Project’. Whilst all the visits were interesting and informative, being with MDHG members reminded us how important it is to involve people with lived experiences in the design, development and delivery of services. For example, Marcel and David are Discus ‘ambassadors’, as they can explain how life-changing Housing First interventions are, far more powerfully than anyone else can. This is something we will be exploring ourselves as we develop our service.

We also attended a Discus team meeting and workshops focussing on the practical application of Housing First principles. This allowed us to get a real insight into their day-to-day work, the methodology and tools the team uses, how the team is structured, how team members support each other and how flexibility and choice for people are built into their service delivery. A good example of this is the ‘profile market’, a mechanism used by people supported by Discus to find the worker who can best meet their support needs, giving them choice and control.

We were impressed by how important it is for Discus to celebrate important events in people’s lives – such as getting the keys to their new accommodation – helping to create positive memories and reinforcing the positive relationships that clearly existed. Interestingly, Discus’ experience is that not everyone will feel comfortable with a celebration, a reminder that everyone is an individual and that our support should always be tailored to each person’s individual needs.

The sessions also highlighted common issues faced by people supported by Discus, the people we support in Torbay and by people using Housing First services across Europe – for example, loneliness, neighbourhood nuisance issues and managing money. These are universal problems where there is no quick fix. Discus are already involved in pan-European work exploring effective ways of supporting people experiencing loneliness and we look forward to learning from this work in the future.

Our visit was interesting, challenging and fun. We learnt new things about ourselves and about each other and feel closer as a team as a result. We would like to thank Discus, and especially Marcel, David and Carl for their hospitality and generosity.