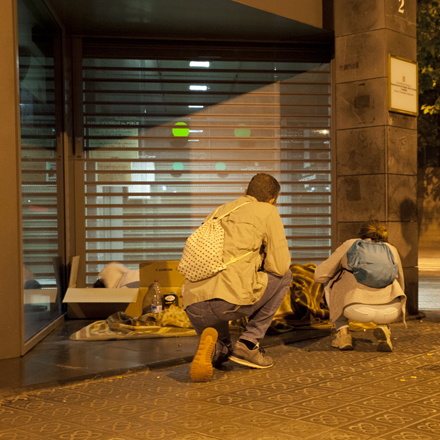 Silvia Torralba is a member of the communications team at Arrels Fundació in Barcelona.

2008 was the first year that Barcelona organised a headcount to determine how many people were sleeping rough across the city. It was organised by the ‘Red de Atención de Personas Sin Hogar’ (Network of Support for Homeless People) and Arrels Fundació took part. 658 people were identified. Since then, the number of homeless people living in the Catalan capital has continued to grow: in 10 years, it has increased by almost half (45%) what it was.

Establishing a number is the first step towards evaluating the problem of homelessness. But it does not go far enough. It’s important to know what happens to people, what their needs are and how vulnerable they are. That’s why, for the past four years, Arrels Fundació has held Connections Weeks as part of the European End Street Homelessness Campaign.

Every year I have taken part in this. Each time we’ve gone to different neighbourhoods – some in the centre of Barcelona and others in the outskirts. This year we surveyed 339 people – but counted a record 1,195 people altogether. This is scandalous in a city such as Barcelona.

Knowing how many people sleep rough in Barcelona and understanding their situation are the basic – yet crucial – pieces of the puzzle required to ensure that nobody lives on the street. Connections Weeks enable us to detect situations of vulnerability, highlight a reality that is normally invisible, and raise awareness among all the people who take part as volunteers – this year 549 – and the general public.

As the saying goes, knowledge is power, and in this case that should be used to improve the resources available to homeless people in the city, to change housing and social welfare policies, and to put pressure on other administrations, beyond local government, that also have a clear responsibility to take effective action.

Last year, a man explained to us that he’d been released from prison a few days before and that the social benefit he received was not enough to pay for a room to sleep in. He was over 70 years old and in a few days it was his birthday.

During our very first Connections Week in 2016 we found nine people sleeping in the same street, with cardboard boxes and sleeping bags. And I still remember a woman who was sleeping next to a young man and, when she saw us, joined us and said, “I want to help.”

Now it is our turn to help and work together with those who have the tools to make it possible. Because achieving #nadiedurmiendoenlacalle ‘NobodySleepingontheStreet’ is possible.

50 mins ago ❌ In Hungary, homelessness is criminalised – and affordable housing is scarce. So what can people do? Who can they… https://t.co/eBxPWrXufH

17 hours ago RT @_RosieGlow_: Fantastic day learning from cities across Europe about their work to #endhomelessness. Looking forward to running a worksh…