Home / News / Our Blog / It’s worth the headache

It’s worth the headache

My absolute favourite bit of this job is finding out about what people are doing out there. It does wonders for my pub-conversation fodder. I can tell people about projects like Saffron Heath (an unofficial favourite in my neck of the woods) which has injected energy and engagement into one of the most deprived areas in the country. Or the Community Land Trusts popping up all over the place and making the term ‘affordable housing’ mean something again. I often mention this year’s (2016) World Habitat Award Winners Canopy and Giroscope, slowly but surely regenerating their communities and bringing the local people with them.  LILAC is another great favourite – a visit to that project makes you believe neighbourliness is possible, even when everybody lives with their face in a smartphone.

Then there’s the sharp end of community-led housing, the issues being tackled collectively by people who find the status quo just isn’t working for them anymore. Resident-led initiatives like West Kensington and Gibbs Green or the East London Community Land Trust show what can happen when people take a stake in their own place.

The potential of community-led housing can’t be overstated. Here in England it’s a bit quirky, a bit rebellious, but in so many other places across the world people doing housing for themselves isn’t just more common; it’s normal. 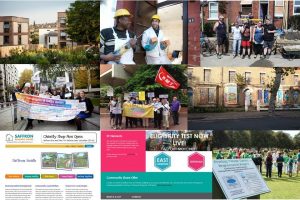 The art of the possible

Now, you could argue that we shouldn’t have to worry about housing ourselves in this country. That the provision of housing for the populace is, and should be, the responsibility of an evolved state. But what happens when the state doesn’t have all the answers? What happens when cracks appear in the system? What do we do when the ‘official’ solutions on offer just seem to make things worse? In my view that’s basically where we are now. And that’s where so many people, in so many other countries, have found themselves and decided to act.

Housing isn’t some abstract thing. The housing crisis is an immediate, subjective problem for everyone. It impacts on each of us as individuals, and the compound effect of that is that it affects us all collectively. One person’s solution is somebody else’s problem. That’s where community-led housing comes in… it’s true, messy democracy with real results.

The tragedy of the commons

Community-led housing makes places work better, by offering everyone a stake. A shared stake means everybody is both collectively and individually invested in a place, challenging the idea of ‘winners and losers’. With community ownership, collective benefits are also individual benefits. A community is a group of individuals, after all.

Getting people to think about housing and places as collective goods and not everybody’s individual business would mean a massive culture shift in this country. It involves challenging our ideas about what property is, what community is, and what ownership means. But the potential benefits are huge. Community-led housing could help to address the stalemate between older and younger generations, tenants and landlords, landowners, developers, planners, housing associations, government… We all blame each other, but the problem is shared – so the solution must be, too.

The pub conversation: Our cultural barometer

As I have said before, for me, the biggest single challenge in gaining widespread acknowledgement of community-led housing here in England is offering people a simple process of engagement. A way people can sign up to shaping their place without an unwieldy tax on their spare time and energy.

I’m convinced the solution is already out there. In a time when we’re all almost constantly connected in a virtual space, it can’t be that hard… can it?

The day I can tell someone at the pub I work in community-led housing and their answer is, “Oh yeah, we’re doing something in our neighbourhood…”, I’ll know something has changed.

1 hour ago RT @SuchiComments: Always a feel of honour & joy when stories of @TheJagaMission are narrated and its spirit is widespread ! @HUDDeptOdish…