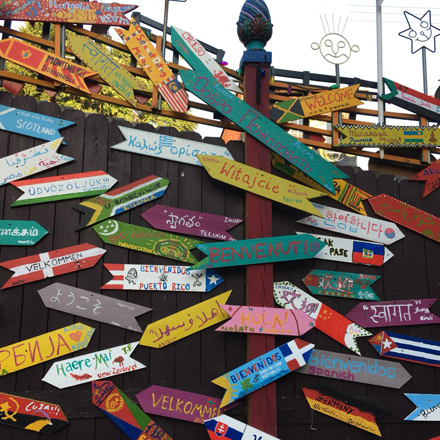 Despite being a multicultural nation, the UK is one of the many countries where there are significant disparities between different ethnic groups. This is, for example, reflected in access to housing.

Fewer black and minority ethnic people (BME) own their home, but discrimination is not only seen in the private sector. BME communities, especially migrants, face more difficulties in accessing social housing. One reason for this is they must demonstrate that they have been residing in a specific area for a certain period of time, which can be difficult to achieve or prove.

The stark results of the Wealth and Assets Survey show blatant differences in the median total wealth per household among different groups: for white households – £221,000, Indian – £204,000, Pakistani – £97,000, African-Caribbean – £76,000 and Bangladeshi –  just £15,000. As wealth is the total sum of one’s valuable material possessions or resources, these statistics indicate inequality in home ownership. Certain groups have a total wealth that is too low to include the value of a house, suggesting they are either privately renting or living in social housing.

This is not the only difference. According to D’Souza, CEO of Arawak Walton Housing Association, those living in the worst conditions are often from BME communities and have more problems finding affordable housing. They are usually concentrated in underprivileged neighbourhoods, in many cases because of racial discrimination or prejudices.

Human City Council research agrees that poorer housing conditions and fuel poverty particularly affects BME communities. According to the report just under one-in-three (30 per cent) of Bangladeshi and Black African households live in overcrowded conditions.  Compare this to white households, where the figure is one in 16 (6 per cent) – which is, obviously, still too high.  It’s important to acknowledge that BME communities are not alone in facing inequalities.

This is clearly unacceptable if we strive for a society where everybody has access to good housing conditions, regardless of their background.

BME and migrant groups are extremely diverse and include people whose families have been in Britain for many generations, along with newcomers from countries from across the world. Each individual will have a varying degree of attachment to the country that they or their previous generations came from. But for certain communities, this link and sense of belonging is considered very important.

Some of these groups get involved in and/or seek the support of diaspora organisations. Despite all the valuable work they do, this term might not sound familiar due to their lack of visibility. The definition of a diaspora organisation varies depending on the country, but in the UK it is understood to be an organisation formed by those who were born in or have any kind of link or feeling of belonging with another country or culture.

Diaspora organisations provide assistance to communities in their host country and encourage the integration of newcomers, as they share similar backgrounds and understand the rules and customs of the country of settlement. Migrants often ask for advice when, for example, they open a bank account, look for a place to rent, or apply for a mortgage. They’re also efficient partners in policy design or collaborations with the public sector when local or national authorities aim to address the needs of these groups.

One example in the UK is BME National, a network established more than 30 years ago when migration increased. Nowadays BME National supports the needs of people regardless of their roots, in defending housing rights, and fighting for inclusion and against racism. The network is formed by different Housing Associations, such as Awarak Walton Housing Association, which is linked to the African-Caribbean community and has been present in Manchester since the 90s. It offers different programmes to provide affordable homes for BME community members, and they are also an important lobbying force at national, regional and local level.

Diaspora organisations are also active in delivering aid to their countries of origin. Thanks to their strong networks in both countries, it is easier to gather donations to respond to unexpected crises. For example, DiaspoRicans, an organisation based in the United States, raised funds for the victims of Hurricane Maria in 2017. They mobilised human and financial resources and had a role in human rights advocacy. They continue to send aid to Puerto Rico on a regular basis thanks to the various donation centres across the US.

One of the fields that diaspora organisations are active in is housing and urban upgrading, for example, the Human Development Foundation which originated in 1997 by a group of Pakistani-Americans. Their focus is on rehabilitation of different communities throughout all regions in Pakistan through actions such as construction of houses, toilets, supply of clean water, maintaining drainage, management of solid waste, installation of water pumps and solar street lighting.

Despite their great efforts, according to the research Voices of the Diaspora, diaspora organisations do not receive enough credit and visibility and the cooperation between NGOs and/or government institutions is weak.  Even more problematic is the fact that with the rise of terrorist attacks and xenophobic sentiments, alongside media misrepresentation of migrants, diaspora organisations are seeing their resources threatened. This has repercussions in terms of the support they can provide both in host countries and the countries of origin.

Despite these constraints diaspora organisations are doing a great job – even if we don’t always notice. We should start by asking ourselves which diaspora organisations are active in our sector and our areas? And how can we include them as an asset to help us in our work, as well as supporting the people they represent? They could play crucial roles with local Community Land Trusts, to improve diversity and inclusion in housing associations, or when we want to support reconstruction efforts after a disaster abroad.

If you are a member of a diaspora organisation, we’re really interested in hearing more about your work in the housing sector, so do get in touch.

31 mins ago 🎇I'm sure everyone will join us today in congratulating our partner @CatComm who this weekend were presented with t… https://t.co/BWSTaBCxSw