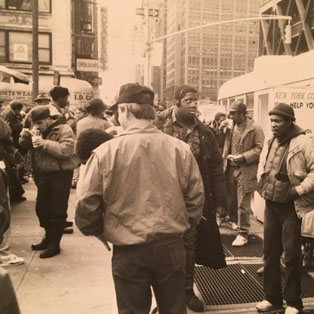 New York: the emblematic city in the land of opportunity. But, like many global cities, she has her share of housing crises.  Street homelessness is still observable on many corners, but there are improvements in policy to reduce this.  New York is unique in the U.S.A with a ‘Right to Shelter’ that aims to keep anyone who qualifies for accommodation under this scheme, off the street. But, this is expensive, the rents and property values in New York, like London, mean that the unintended beneficiaries of such a policy are the private landlords who let properties for emergency shelter at premium prices.  This diverts money from investing longer term into affordable bricks and mortar to house families now and for the future. 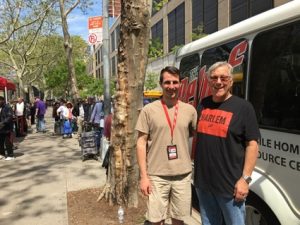 Mayor Bill de Blasio has focused on provision of more affordable housing as one of his key platforms. The New York City Mandatory Inclusionary Housing Policy Study (2015: 8) states that “The number of rent-burdened households in New York City has risen 11 percent since 2000, to almost 55 percent of all renter households.”[1]  The Mandatory Inclusionary Housing Policy (MIHP) was adopted at the end of March 2016 and it includes bold actions on numbers of affordable housing units to be included in new developments. However, there are already threats to the implementation of the policy, with de Blasio this week rallying developers in Times Square to help him lobby State legislators to keep tax abatement 412a which ensures developers in non-luxury property see a return, and which is vital to plans to deliver more homes.

There are many stories of New York people unable to access the rental market in the city because they cannot afford the rent. Here is just one recent story, as told in The Guardian.  There are many others.

On my recent trip to the U.S.A I spent two days in New York and this gave me the opportunity to meet up with a project that I volunteered with as part of my senior year at high school. New York City Relief offers individual support on the street in various locations across the city; volunteers take a bus equipped with hot soup and bread, water, clothes and first-aid.  People offer advice on housing and employment and there is also spiritual advice if needed, to help alleviate the ‘hopelessness’.  This service is little changed from the one I volunteered with 25 years ago.  It can bring temporary relief and some hope to individuals, but for such a complex problem as homelessness, a flexible intervention at the systems level is required.

Affordable housing provision must be increased to meet need. Common Ground (a predecessor organisation to Community Solutions) provided 652 permanent New York supported housing units in 1991, 50% for general affordable let and 50% for those with specific support needs.  But more such units are required if supply is to meet demand.

The Mayor’s policy is a good start but it needs support and coalition for successful implementation. There is also a need for innovative non-governmental organisations to offer fresh approaches and new solutions.  On the advice of World Habitat’s David Ireland, I went to meet Paul Howard at Community Solutions. The work of this organisation is truly inspiring in scope and it is increasingly global in reach.  Their100,000 Homes Campaign was awarded the World Habitat Award by the Building and Social Housing Foundation (World Habitat) in 2014 and with the support of World Habitat and other organisations it is now spreading across the U.S.A and indeed across the globe. The original project was launched in New York in 2010 as the Street to Home initiative, based on the principles of Housing First.  Since then, although the city of New York has not taken the next steps in the approach with Community Solutions because it is seen as ‘risky’, there has been great success in Los Angeles, and a recent introduction of the approach in Valencia in Spain.  They are helping to introduce projects across Canada, the U.S.A and Europe.  Community Solutions is working with agencies across Europe and in London, the National Housing Federation have announced their NHF 100,000 homes campaign. 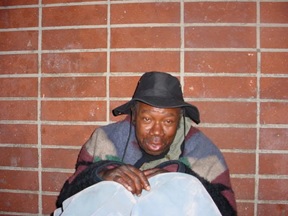 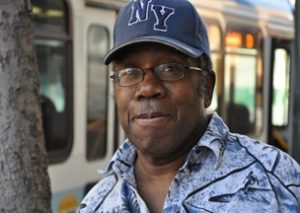 During my meeting with Paul at the Community Solutions office in New York, he showed me a presentation that included photographs taken by the team who conducted the initial survey of street homelessness in LA. They have found that taking ‘before and after’ photographs is a powerful tool to demonstrate the difference their approach makes to individuals.  The two photos on the left are of the same man – the first image the 30 years of homelessness and alcohol abuse visible – on the right a sense of wellbeing and hope observable.

What really struck me, in the conversation with Paul, was the enthusiasm for working at a ‘systems level’ because Community Solutions has seen that it can achieve their aims to cut homelessness drastically. Working at a systems level means first understanding the data.  In Valencia when the Mayor was first approached, he suggested the city had about 70 homeless people.  After the three day data collection exercise by Community Solutions and local partners the figure stood at 404.  If local authorities and politicians are to be convinced to act and improve their systems and policies, then robust evidence in vital.

Another example: Paul talked to local authorities and other agencies in Los Angeles about devising a common housing application form – they said it couldn’t be done, the systems were too different. After a lot of work analysing 44 different forms, Community Solutions were able to help develop just one form – it could indeed be done and this made a big impact on the individuals trying to access the system.

A Housing First approach isn’t entirely new; it has been tried in a number of cities for example in the UK and a report in 2015 has evaluated key findings to date. But a renewed focus, utilising housing first, and blending it with the expertise of Community Solutions’ work in many projects so far, is promising for areas like Valencia where the project has recently started and for Westminster where teams of people will be collecting data in the Summer 2016 on homelessness, as the first step in a new project in England.

Jo Richardson is Professor of Housing and Social Research and Director of the Centre for Comparative Housing Research at De Montfort University, Leicester.

[1] The policy defines ‘rent-burdened’ as families paying in excess of 30% of its income on rent.

2 hours ago RT @PatrickDuce: Find out more about the network, and how you can join - https://t.co/EEmndNEN1a

3 hours ago It is with delight today that we can say @OzStopa Director, Pavol Sabela has deservedly become the first social wor… https://t.co/EB8lteL1oo