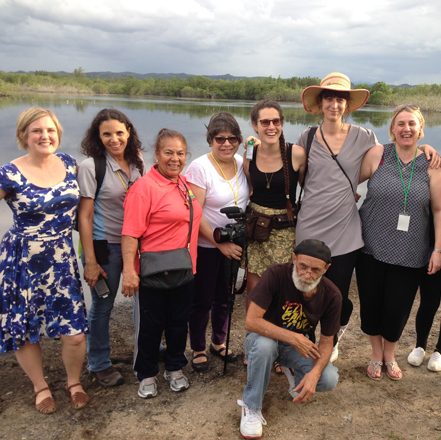 Caroline Nagy (pictured first on the left) joined our peer exchange to World Habitat Awards winner Caño Martín Peña Community Land Trust in Puerto Rico.  She is the deputy director for Policy and Research at the Center for NYC Neighborhoods.

In the aftermath of the 2016 U.S. elections, communities throughout the United States began experiencing a new wave of civic participation, organizing, and activism. Much attention is focused on federal politics, yet many of the same challenges persist in our neighborhoods and cities: gentrification and displacement, skyrocketing housing costs, and a general feeling of powerlessness among community members in the face of rapid neighborhood change. As a result, many of us in the housing advocacy and community development movement are asking ourselves: how can we build power to fight against displacement as well as heightened political insecurity and instability? How can we continue to dream big in the face of long odds that may be getting longer?

An answer can be found close by in Puerto Rico, where the communities of the World Habitat award-winning Caño Martín Peña project have succeeded in building community power and gaining control of their land by pioneering the first application of the community land trust model to an informally-owned settlement. To accomplish this feat, the people who live on the settlement have developed strong community roots and political clout, leading to the establishment of several new local institutions, a broad network of support both within Puerto Rico and globally, and an impressive string of political victories. But such successes have not occurred overnight, nor are they the result of technical solutions imposed from above by experts—they are the result of over 15 years of deep community organizing and empowerment.

21 hours ago RT @SuchiComments: Always a feel of honour & joy when stories of @TheJagaMission are narrated and its spirit is widespread ! @HUDDeptOdish…