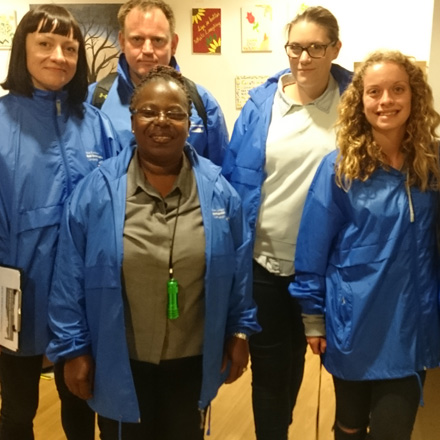 Evolve Housing + Support is one of the key organisations in the European End Street Homelessness Campaign, and works across eight London Boroughs, including Croydon. We are delighted to hear that they have been shortlisted for a London Homelessness Award.

Since signing up to the campaign a year ago Croydon have been making waves with their CR Zero 2020 campaign, which aims to end chronic rough sleeping in Croydon by 2020. The campaign works on the principle that rough sleeping affects entire communities and the community has both the responsibility and resources to end it. It seeks to influence system wide change across many sectors including health, housing, the criminal justice system and education.

Croydon was the first city in the campaign I visited as a new staff member of World Habitat last year. I was immediately impressed with their passion and determination to end homelessness. Their campaign started in August 2016 with a Connections Week – a movement of community action where volunteers speak with homeless people to get a true picture of who is sleeping rough.  My volunteer team included a diverse range of local residents including a school teacher, a council worker and a university student and it was easy to sense a real community drive to end homelessness. Most of Croydon’s volunteers had never volunteered before, and got involved because the campaign offered something different and an opportunity to be part of something bigger. This is something I personally love about the campaign. It also offers a chance for volunteers to act together and share a common humanity.

The volunteers acted with respect and care towards the homeless individuals they spoke with and realised that those sleeping rough were also part of their community. People who had previously experienced being homeless also volunteered and they were invaluable in helping to find  people were sleeping rough and understand their needs. They also showed other volunteers how homelessness is a temporary state; whereas stereotyping and images can tend to paint it as a more permanent picture.

Even though months have passed since the Connections Week and the initial surge of community action, Croydon’s passion and drive continues. The local community has remained active through ‘Solutions Groups’ which meet every two months to discuss next steps. The Croydon community get the chance to speak with different homelessness charities, housing, health and faith based organisations and engage in discussions to end homelessness. ‘Real people’ don’t often have the chance to have a voice and be part of the complex politics of homelessness solutions. They are now working to ensure Housing First can be possible as a solution in Croydon.

Evolve Housing + Support has also been an essential resource in the campaign at a European level, sharing their knowledge with other cities including Torbay and Brussels.

Croydon will be holding their second Connections Week in August to create a new rush of community action and urgency for the issue and to build on their success so far.

Jeremy Gray, Chief Executive of Evolve said: ‘We are proud to have been recognised for this award and are extremely grateful to members of the community, our volunteers, faith-based groups and other partners for supporting CR Zero 2020. We will continue to work tirelessly to help end chronic rough sleeping by 2020.’

The London Homelessness Awards aim to recognise the creativity and imagination that homelessness organisations bring to help those who are homeless. Even if they are not successful in the awards their commitment and passion is something we can all learn from as we continue the campaign and gives us useful lessons for how to ensure local people are at the heart of change.

14 hours ago 🔑 When ordinary people hold the keys to safer and affordable housing, it opens more doors 🏘️ This is called Commun… https://t.co/oe4z351bmp

16 hours ago RT @StringerEilidh: Had such a lovely time at our Women’s Open Space this afternoon. Great to hear how much women value the space & to see…

17 hours ago RT @CescaAlbanese: It's been a few years since we've published a @crisis_uk @ISPHERE_HWU GB #homelessness monitor. A useful comparative vie…