Home / News / Our Blog / Could simple bamboo roofs and mud mixed with lime save houses from severe destruction in Pakistan floods? 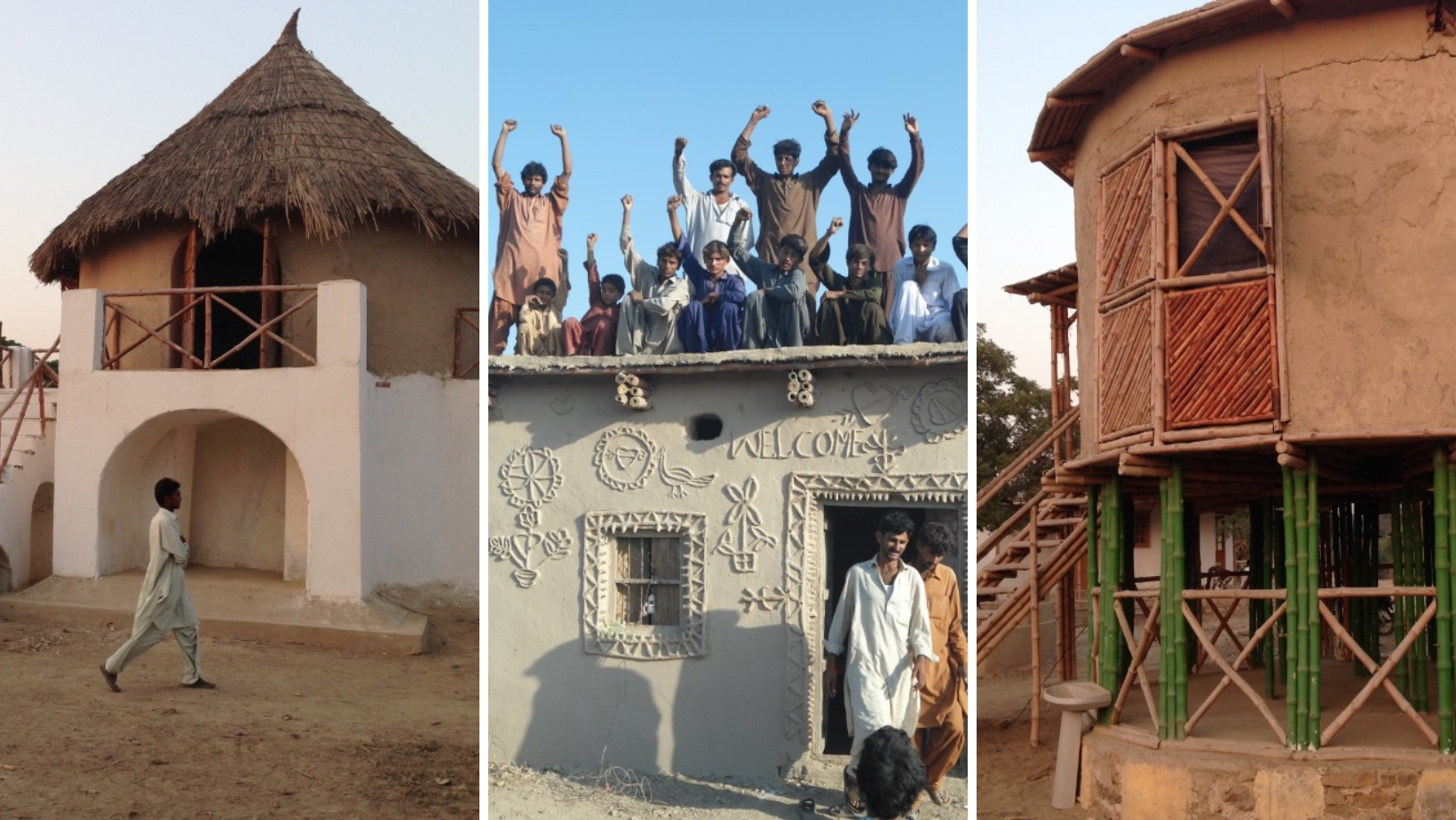 Extreme floods are devastating Pakistan, leaving millions of people without homes. David Ireland, chief executive at World Habitat, has previously visited the country to see a partner organisation’s work in rebuilding communities and strengthening houses after floods. Here, he reflects on his visit.

My colleague asked me an intriguing question: What would have been different had we visited here 1,000 years ago?

We were in a very remote and extremely poor village in the middle of Sindh province in Pakistan which showed few obvious signs of the modern world. The question was prompted by an earlier comment from our host that the village had experienced a one-in-a-thousand-year flood.

Five years before, in 2010, the Indus river had swollen and spilled over into the flat plains of central Sindh. A flood similar, although not as severe as today’s, devastated the region killing thousands of people, and washing many villages totally away.

The flood was hard to picture a few years later. The land was dusty and parched in the late summer heat. The rebuilt village was small and compact surrounded by a dense barrier of thorny branches that served to keep cattle and people safe after dark. The houses that filled the enclosure were simple single room structures of mud walls and brushwood roofs.

In 2010 the water had risen rapidly, washing into the doorways of the houses quickly eroding the mud walls. Timber for roofs was a scarce resource. Few trees remained in this austere landscape, most having been felled for firewood. Better-off families had bought iron girders instead of timber joists to hold the roof up. This proved a disastrous choice. As the walls began to disintegrate in the rising water, the heavy iron came crashing down, crushing anyone sleeping underneath, pictured below. 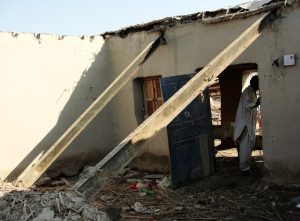 Within hours the village had all but disappeared. The homeless survivors took refuge on the nearby road which was elevated on an embankment and remained above the floodwaters. There they stayed under tarpaulin sheets for weeks until the water receded, exposing the land on which their village once stood.

When disaster strikes, villagers have to recover alone

Look on a Google maps image of rural Sindh and you will see the land of the Indus river basin dotted with thousands of small villages. But zoom in further and there are more, lots more, unnamed, unidentified settlements existing literally off the map. There are no services or help for the people who live in these places. They provide for themselves, build their own homes and when disaster strikes they have to recover alone.

The village we stood in back in 2015 did receive help however. The Heritage Foundation of Pakistan developed a simple system for building back houses better. The system was simple to learn, and produced a house that looked similar to what people were familiar with.

It had three modest improvements. Mud was mixed with lime in a pit before it was used. This created a hydraulic lime mortar. This substance behaves more like cement than mud, setting to form a stronger wall that is water resistant. Walls built of this substance could stand in water for days without dissolving. 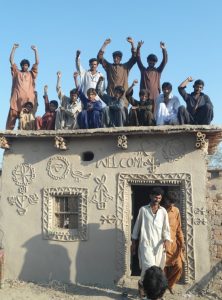 The house was constructed on a plinth. An elevated platform that would keep the house up above the water level for the more usual floods that might occur.

Instead of wood joists or iron girders, the roof was supported with bamboo. Bamboo grows naturally in Pakistan – it’s cheap, light in weight and incredibly strong. It just needed to be sawn to length and the ends plugged to stop insects breeding inside. Pictured left – the strength of a bamboo roof put to the test!

Village built back better than before

For barely any financial cost, the village was built back better than before. The beauty of Heritage Foundation’s work was that it was not imposed but offered through training, and taken to the most remote villages through barefoot entrepreneurs (local villagers who earned a few rupees training and supervising the houses being built) – thousands of people in hundreds of villages across Sindh benefited.

So unobtrusive were the changes that it was hard to notice the difference. The vernacular architecture still had the artistic flourishes of images of peacocks and floral patterns pargeting embossed onto the walls.

Today the village has been tested again, floods much deeper and more destructive than 2010 have overwhelmed much of Pakistan. The one-in-a-thousand-year flood is back just 12 years later. The climate emergency has made exceptional disasters all too common. It’s too early to say what has happened to the village we visited, but the houses are stronger, and the skills to rebuild them better are rooted into this community.

The Heritage Foundation of Pakistan was a finalist in our 2014 World Habitat Awards. Read more about our awards, past winners and be inspired by innovative housing projects on our website.

19 hours ago RT @RockTrust_Kate: "Scotland is unique in its progressive policies and legislation. There are jurisdictions that yearn for such protection…

23 hours ago RT @ngoscfederation: #ClimateEmergency is increasing the #HousingCrisis Urgent action needed to house people made #Homeless and end #homele…