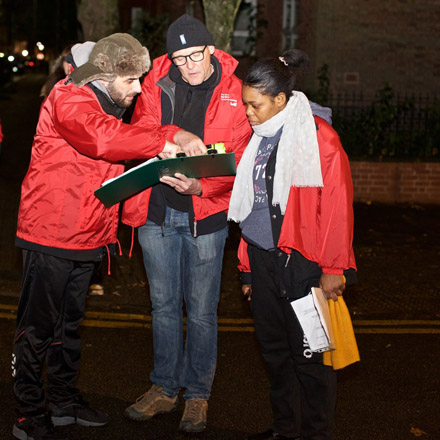 Jo Richardson is Professor of Housing and Social Research and Director of the Centre for Comparative Housing Research at De Montfort University, Leicester.

Homelessness is on the rise across the UK and Leicester city has been no exception.  Figures show a year-on-year rise in street homelessness in recent times.  The National Audit Office report (2017) referenced national Department for Community and Local Government (DCLG) figures showing that: ‘The number of rough sleepers stood at more than 4,000 in the autumn of 2016, having increased from fewer than 1,800 in the autumn of 2010’[1].  However, organisations like Shelter would argue this figure doesn’t reflect the current reality.  In a report published on 8th November 2017, the organisation estimated 307,000 people were either sleeping rough or inadequately housed in Britain; the headline of their research was that this equated to one in every 200 people[2].

In their 2016 return to DCLG, the city council in Leicester provided an estimate figure of 36 rough sleepers. There had not been an actual count or survey in the city for well over a decade.  Charities led by Action Homeless, public agencies and De Montfort University (DMU) colleagues got together and decided the time was right to do something different.  We decided to be in the vanguard of European cities who were taking part in World Habitat’s European campaign to end street homelessness.

Connections Week in Leicester took place between 6 and 11 November.  Ninety-three homeless people were surveyed in Leicester across the week.  A key event during that period was the street survey on the night of 7 November, where over 80 students from DMU got involved and thirty-one homeless people were surveyed. The majority (95%) of homeless people interviewed had medium to high vulnerability scores. Homeless people in Leicester face multiple and complex health needs with the most severe cases involving physical health, mental health and substance use issues. Forty percent (40%) of respondents replied that their homelessness had followed a traumatic episode or experience. There was a mixed picture of ‘aspiration’ and ‘hope’ with no clear link between levels of hope, age or length of homelessness.

Homelessness is a complex issue and requires a multi-layered partnership response. The campaign approach and methodology during ‘Connections Week’ seemed to work well and provide momentum for all the partners to stay on board. Homeless people who answered the survey questions were provided with a bed and hot food if they wanted to come in from the street – but longer term solutions are needed for those who have been through the ‘revolving door’ of hostels and street in previous homeless episodes.

Partnerships are of key importance to the Leicester campaign.  DMU was at the heart of the impetus to make this happen in Leicester and our students were engaged throughout the training sessions, the count, the data inputting and also the community report event the week after the survey.  Leading allies in the social housing sector are vital to drive the change that is necessary. Chan Kataria, CEO of emh homes, said in his blog for Inside Housing that we needed to eradicate, not manage, street homelessness. Housing First is one approach to disrupting the status quo – by providing a secure roof over a person’s head and then bringing in support.  In Leicester, emh have got on board and will be trialling a housing first type of approach in a small number of its properties.  Other cities have different innovations and, for example, Manchester set out to use social impact bonds to raise the funding necessary to house its rough sleepers.

The momentum for change that has built in the city around the European End Street Homelessness Campaign has been heartening, but importantly it will drive the next steps required by agencies, charities, and all members of our Leicester city community.  We could not have done this without our student volunteers at DMU and, with their and other partner help, the future for ending street homelessness in Leicester looks bright.

See more about the Leicester campaign and the report at www.dmu.ac.uk/ESHLeics  and on twitter here  .

13 hours ago 🌟Weekend Reading🌟 A new project has been launched in #Leicester to gather insight and boost responses to women's… https://t.co/5YkmJjMqpw