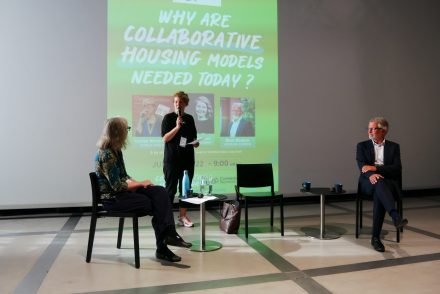 Helsinki, Finland, was this year’s convergence place for grassroots organisations, practitioners, thinkers, policymakers, and a public interested by Community-Led Housing (CLH) in Europe and beyond and nobody left disappointed.

For the 2022 edition of the International Social Housing Festival (ISHF), Housing Europe invited urbaMonde to reiterate the successful Collaborative Housing that took place as what could only be described as a fringe event of the last ISHF in Lyon. This time, the Collaborative Housing Day took its rightful place in the official programme, in the beautiful Central Library Oodi, in the centre of Helsinki.

As a coordinating organisation of the CoHabitat Network, and with the special support of World Habitat and Cooperative Housing International (CHI), urbaMonde worked hard to make the most of the few days in Helsinki to generate knowledge transfer and networking opportunities around CLH for the visitors.

On the 14th of June, two small groups had the opportunity to visit to two housing projects in the new development District of Kalasatama. The visits where organised by urbaMonde with the support of finish CLH activist Salla Korpela.

Residents of the Kotisatama senior people co-housing and Sumppi intergenerational co-housing showed the international visitors around and explained how they managed to organise, co-design, finance and manage their new homes and generous shared spaces and facilities. Even though these projects are built on municipal land, leased to the resident’s associations, it became apparent these homes are not particularly affordable.

The next day, around 100 different participants chose to come to the Collaborative Housing Day in a very busy programme of activities offered by the ISHF partners. 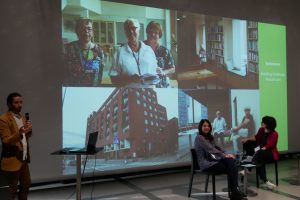 The day was inaugurated by representatives from World Habitat, Habitat International Coalition (HIC), Housing Europe, and the City of Helsinki, and offered high quality discussions and debates about different elements around CLH including financing, dissemination of models Housing Cooperative and Community Land Trust models, defining and mapping, demonstrating benefits in a context of affordability crisis, sanitary crisis, and climate change.

During the lunch-networking activity, attendees could meet and exchange with residents of project and organisations promoting collaborative housing in Belgium, Finland, Germany, Ireland, Serbia, Slovenia, Spain, and the UK.

The enthusiastic discussions with old friends and new people interested by CLH didn’t stop outside the library… by electric scooter, tram or walk, 70 people from 19 countries (including Australia, Canada, Cyprus, Greece, Taiwan…) gathered a bit later at Malta House, an emblematic co-housing project. Salla Korpela and 30 residents greeted everyone with a glass of champagne and delicious food cooked by some of them in Malta’s professional kitchen. 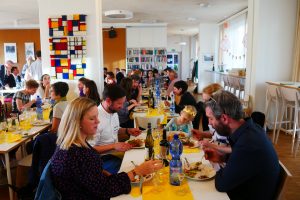 At each table enthusiastic discussions, laughs, contact exchanges happened during the evening, while the residents led small groups of guests around the building, the shared facilities (guest and music rooms, wintergarden, workshops… and of course saunas!) and up to the terrace to admire a midsummer midnight sunset…

With new friendships facilitated by this intense and emotional human interaction, we hope that concrete partnerships and cooperation’s will happen in the short term:

We now hope to receive feedback on these kind of successes from the people who attended these activities in Helsinki!

We are already looking forward to the next ISHF, in March 2023 in Barcelona. Barcelona is a city with a strong structured social movement for housing rights, technical support actors for non-speculative affordable housing through Sostre Civic, and a sincere political commitment by the municipal government. This commitment has already facilitated the access to land to cooperative housing and is creating the first city-wide Community Land Trust in Europe.