A good place to start 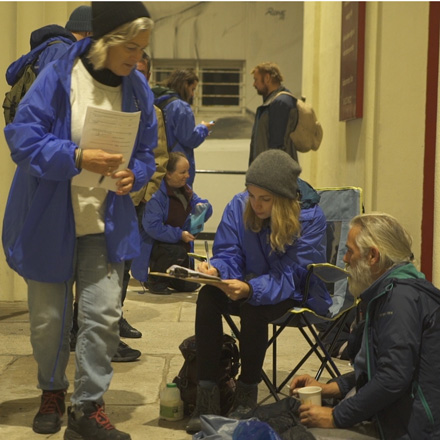 My introduction to Galvanise was at a party. I overheard a friend of a friend asking if anyone would be interested in joining an initiative to help local homeless people. I’d been looking for an opportunity to volunteer for a while, so I signed up.

I’ve recently moved back to Brighton after living overseas for 16 years. I had heard that the number of people sleeping rough had risen dramatically since I’d been away. But that didn’t prepare me for the day-to-day reality of it.

Between 2010 and 2017, rough sleeping experienced a tenfold increase in Brighton and Hove, and GalvaniseBH was set up to bring the community together to tackle this. Last year, our city saw the biggest decrease in the number of people sleeping on the streets nationwide, with a reduction from 178 to 64.

The Connections Week is centred around a survey designed to give a voice to people sleeping rough. This is the second time local volunteers have gone out onto the streets to have conversations with rough sleepers about their experiences and find out what they need.

A training session got us up to speed. We ran through the survey, the best ways to approach people and how to stay safe. The Connections Week started a few days later. I opted to join the late shift and at 9pm on a Monday night I turned up at the hub, found my team and geared up for four hours of walking and talking.

Our area included a long stretch of the beach. It was a really windy night and it had been raining for days, so a lot of the usual sleeping spots were empty. We headed inland to a main road that was more sheltered and started to see a few sleeping bags in doorways.

At first, I was quite nervous to approach people who were sleeping but the hot tea seemed to make the prospect of a chat more appealing.

I’d had plenty of interactions with people on the street before, but it was usually more about handing over a bit of change or explaining why I couldn’t. The chance to sit down and have a real conversation with no agenda, to just listen, felt like such a privilege.

Everyone who agreed to talk to our team was incredibly open and honest about their experiences. Some of the stories we heard were heartbreaking. And it was difficult not to get angry at the systems that had failed to keep them safe. There were feelings of anger and disillusionment, but there was also hope.

I learnt a lot about the resources and support that exist in the city. It was comforting to know there are many charities dedicated to homeless people operating in Brighton and Hove – and that most of the people we spoke to were accessing them. But at the same time, it made me wonder why there are still so many people living on the street.

It’s clear that there is no one-size-fits-all solution. And that more needs to be done to prevent homelessness, as well as help those who are rough sleeping to get back on their feet. When it comes to ending rough sleeping for good, talking to people about their experiences and asking them what they need seems like a very good place to start.