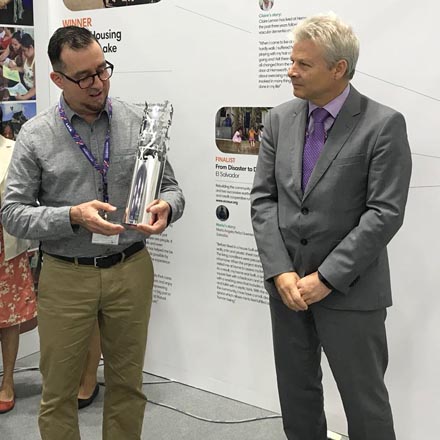 Roberto Jiménez is the CEO of Mutual Housing California, World Habitat Awards 2017 winner for the project Mutual Housing at Spring Lake. We spoke to Roberto (pictured left with Rafael Tuts of UN-Habitat) at the World Urban Forum 9 in Kuala Lumpur, Malaysia, where they were presented with their trophy.

How would you describe Mutual Housing at Spring Lake in a few words?

What motivates you in your role?

I’ve spent the last 15 years working on designing and developing agricultural workforce housing and this is the first zero net energy project in that context of affordable housing, which is incredibly exciting.

What is the single most important part of winning the World Habitat Awards?

It brings recognition for farmworker housing and the zero net energy aspect, in which Mutual Housing has been a leader.

Why do you think you won?

I think we won primarily based on the community aspect. We’re really about the development of the community, bringing technical skills and having impact on the lives of families.

Tell us about your experience collecting your Award at the World Urban Forum.

I’ve never been to one before and to see so many people from all over the world is incredibly inspiring – they’re doing really important and impactful work.