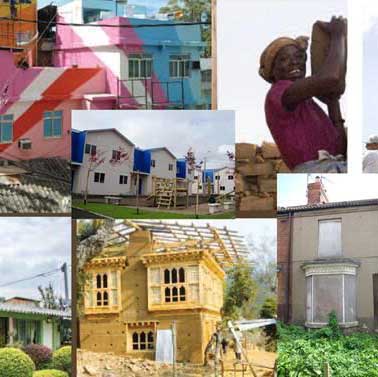 Originally a nomadic hunter gatherer community living in remote rural areas of Bhutan, the Olep were encouraged by the government in the 1970s to settle in villages. With no experience of settled living and their earlier means of living off the forest no longer available, the community fell into extreme poverty. This project, run by the Tarayana Foundation, has developed skills and encouraged a self-help ethos that has successfully helped the community recover and prosper.

Back to Rio – Brazil

This huge scale public arts project has radically transformed the image of one of the most notorious favelas in Rio de Janeiro. It mobilised a community to paint the façades of their houses creating massive works of art. The effect has been to redefine their surroundings and turned a no-go area into a dynamic community.

This project helps with simple adaptions and improvements to bathrooms for disabled people living in low income neighbourhoods in Medellín. The effects are remarkable giving independence to disabled people and freeing their carers from constant responsibility.

Nashira, A Song of Love, A Women-led Project – Colombia

Nashira Un Canto de Amor (a song of love) is an eco-village in rural Colombia built for and by women who have suffered domestic violence and/or displacement as a result of Colombia’s fifty year civil war. The project is a model of how different ways of living together can make a community more resilient, both ecologically and socially.

Empowering the Poor: Building the Capacity of Urban and Rural Communities – Malawi

Following the Slum Dwellers International approach and challenging Malawi’s ‘hand out culture’, this project is very much community-driven. It focuses on poor communities across the country, particularly in urban areas, and takes a comprehensive approach to development by empowering communities to organise, improve their living conditions and infrastructure, and increase their incomes by setting up viable enterprises.

The Martín Peña Channel was once a waterway that ran through the middle of the Puerto Rican capital San Juan. A community land trust is helping transform an informal settlement around this polluted and flood prone river channel into a sustainable community. It provides a new model for improving informal settlements in cities without them then becoming unaffordable for the original residents.

Lilac is a self-planned and managed community in Leeds, England. It embraces the concept of living sustainably and communally. Members of Lilac have their own individual houses but share financial responsibility, the land, the development and day to day management. This supports greater resilience and provides permanently affordable housing.

The Highlands Small Communities Housing Trust ‘Rent to Buy Scheme’ helps people on low income living in the remote highlands of Scotland to find an affordable home. At the heart of the scheme is a financial mechanism which enables low income families to save up to buy a home whilst they are renting it.

Self-help Housing in the North of England – United Kingdom

Canopy and Giroscope work in cities in the North of England  and are pioneers in a movement of UK housing providers called “Self Help Housing”. These housing charities train homeless and vulnerable people to renovate abandoned properties and bring them back into use. The completed houses provide low cost homes for homeless local people who are homeless or in housing need.

The winners of the 2015-16 World Habitat Awards will be announced in February 2016 and presented with their awards at Habitat lll in October 2016.