Updates from our award winners and finalists 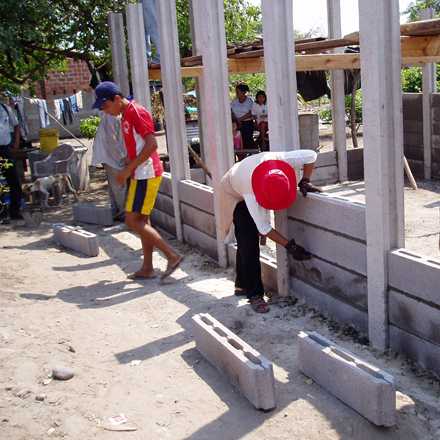 Recently we’ve been asking our World Habitat Awards winners and finalists how they have progressed since entering.  We wanted to find out how these projects continue to inspire and benefit communities long after the awards are over.

La Paz Post-earthquake Reconstruction Programme in El Salvador (winner 2004) restored and improved the housing condition of those affected by the 2001 earthquakes.  Researchers went to see the project in 2013, 12 years after the earthquake and nine years after completion.

Gandhi Nu Gam (finalist 2004) was a post-earthquake redevelopment in India that maintained the socio-cultural traditions and building systems of the local area.  Researchers visited Gandhi Nu Gam village in 2013 to gather evidence on the effectiveness of reconstruction programmes over the medium to long-term.

Champlain Housing Trust in the USA (winner 2008) was an early pioneer of the community land trust approach of providing affordable housing in perpetuity.  In 2015, they made a commitment to end chronic homelessness in the Vermont area and the following year launched a new coalition called Building Homes Together.

Preventing Typhoon Damage to Housing, Central Viet Nam (winner 2008) applied key principles of safe storm and flood resistant construction, both to existing and new homes, as well as to community buildings.  In 2013 and 2014 researchers visited the houses to see the long-term effects of the reconstruction.

South-South Cooperation: international transfer of the FUCVAM model of mutual aid housing cooperatives (winner 2012) was initiated in Uruguay to support the international transfer of the FUCVAM approach – which follows the key principles of solidarity, democratic participation, self-management, mutual aid and collective ownership of property – to other countries in the region and around the world. Since winning a World Habitat Award they have continued to expand their international reach in scaling-up community-led housing.

The 100,000 Homes Campaign (winner 2013) was part of the strategy of the NGO Community Solutions to end homelessness in the USA, advocating and transferring the proven ‘Street to Home’ method pioneered in New York to communities elsewhere. They continue to fight homelessness with their latest campaign Built for Zero.

Liter of Light (winner 2014) aims to provide poor communities in the Philippines and around the world with a cheap source of lighting that can be produced and distributed locally using recycled plastic bottles. The project has expanded to a number of countries around the world and continues to develop new innovations in solar-powered lighting.

Y-Foundation (winner 2014) aimed to increase the amount of affordable rental housing made available to homeless people in Finland.  Finland is now the only European country in which street homelessness is not rising.

More information can be found on each project page along with all of our winners and finalists.

We want to share the successes and ongoing achievements of World Habitat Awards projects – if you have an update to tell us about please do so via our online form.