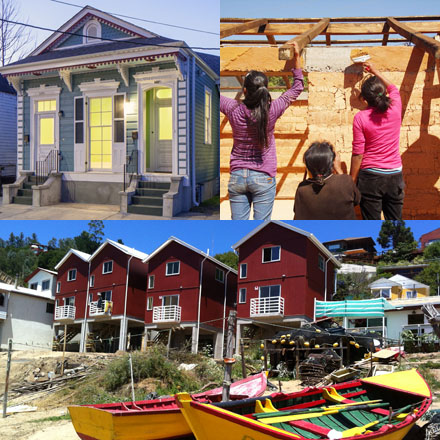 A range of projects which address post-disaster housing in vulnerable communities worldwide are featured in the final 12 of this year’s World Habitat Awards.

‘Iberville Offsites: affordable homes resisting gentrification’ is a US based project in New Orleans, a city devastated by Hurricane Katrina in 2005. In an area with abandoned historic buildings and local people in need of affordable accommodation, the project renovates homes for low-income families who would otherwise be forced out to unattractive neighbourhoods. By both providing homes and improving whole neighbourhoods, the project takes a holistic approach to creating vibrant communities.

Co-operación Comunitaria A.C. is a not-for-profit organisation in Mexico which revives traditional construction techniques combined with modern approaches for self-build resilient houses in areas vulnerable to natural disasters. Through the ‘Reconstruction of Habitat’ programme, low-income communities are strengthened in their resilience to disasters, sustainable management of natural resources and increased solidarity amongst residents.

After an earthquake and tsunami in 2010, over 11,000 buildings on the Chilean coast were destroyed. ‘Resilient Social Housing’ is a government scheme to build new houses and protect the livelihoods of those affected. ‘Stilt houses’ are designed to withstand the effects of natural disasters occurring on the coast, with a focus on retaining the local culture and economy by the sea.

We are always looking for projects from around the world that provide innovative answers to housing problems.  If you have an inspiring project to share with us, find out more about entering the 2017-18 World Habitat Awards here.

13 mins ago RT @SuchiComments: Always a feel of honour & joy when stories of @TheJagaMission are narrated and its spirit is widespread ! @HUDDeptOdish…

6 hours ago 👋 Happy European Day of Languages to all our partners and supporters across the continent! It doesn’t matter what l… https://t.co/dAsaWA6nKv