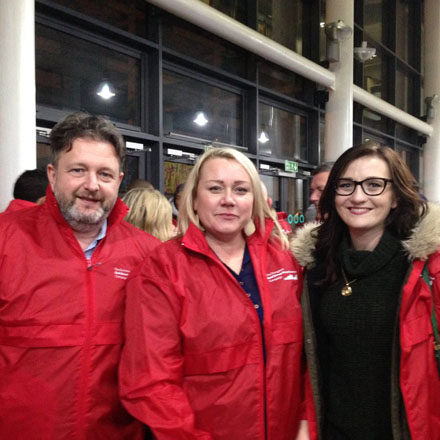 November is a busy month for the European End Street Homelessness Campaign with three of our new cities holding their Connections Weeks: Leicester, Brighton and Alicante. The weeks allow the whole community to go out and speak with those sleeping on the streets to find out their needs.

Leicester, UK is currently running their Connections Week. Their main survey night took place on 7 November. The week is led by Action Homeless with support from De Montfort University students and staff as volunteers. As well as the main count volunteers have also visited day centres, hostels and accommodation projects around the city. You can see more from the week on Twitter here.

Alicante, Spain will run their Connections Week on 21-22 November. The week will be organised by REAPSHA: La Red de Entidades para la Atención a Personas Sin hogar, a network of organisations working in homelessness. RAIS Fundacion, who lead the campaign in Valencia, are offering technical support to help Alicante with the week. You can follow them using the hashtag #HomelessmeetupALC.

Brighton, UK will run their Connections Week from 28 November to 1 December led by Downslink YMCA and Brighton YMCA with support from Brighton and Hove City Council. The event will be called Galvanise Brighton and Hove and you can follow the event on Twitter here. They are currently recruiting for volunteers.

You can now see updated information for all of our ten campaign cities on The campaign so far section of our website.

Updates from other cities

For World Homeless Day we spoke to Croydon, UK volunteer CJ to hear about his experiences volunteering with the campaign. Read the blog here.

Zero Flat Housing Scheme launches in Barcelona: Arrels Fundacio, who lead on our campaign in Barcelona, are working on a new project which aims to support the 20% for whom Housing First does not work. Called ‘Zero Flat’, the project aims to offer night-time accommodation to people known to Arrels who have been living on the street for many years and are currently unable to adapt to other resources. The project shows the importance of having a mix of accommodation options for those who are experiencing street homelessness. You can find out more in this short video.

GHN Conference: On 3 October the Glasgow Homelessness Network held their annual conference. The conference brought together stakeholders to form an alliance which will work to ‘stop managing homeless and start ending it’. Speakers included Herriot Watt University, Mayday Trust and Crisis Scotland. Dave Robinson from Evolve Housing + Support, who lead our Croydon campaign, delivered a workshop on the ownership of homelessness as a community issue. Find all presentations here. It’s great to see such collaboration and energy in one of our campaign cities!