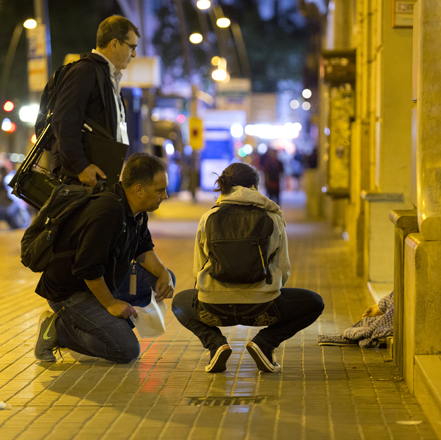 Brussels (lead partner: Infirmiers de rue asbl – Straatverplegers vzw), where in excess of 400 people are already sleeping on the streets, and more women, families and young people join them each year.

Budapest (lead partner: Habitat for Humanity Hungary), with hundreds of people on the city’s streets, some very visibly in the city centre, and others hidden in old buildings, woods and other locations.

Glasgow (lead partner: Glasgow Homelessness Network), where street homelessness has increased by 60% since 2013, with approximately 1,000 people reporting that they slept rough during 2015-16.

They have all made the commitment to take a Housing First approach to ending homelessness, getting to know every person sleeping on the streets by name and understanding their needs.

Representatives from the pilot cities (Valencia, Barcelona, Westminster and Croydon) recently met with the organisations involved in the new cities to share their experiences so far.  The campaign has achieved some early and inspirational successes, with over 900 street homeless individuals participating in surveys and over 1,000 local volunteers taking part in night-time survey teams.  Survey findings are being used to improve commissioner and charity strategies and services, and speed up access to housing for those individuals sleeping on our streets.  A summary of the external evaluation report about the campaign is available here.