On 16 June, the 19th annual awards of the Bratislava region were presented by the Mayor of Bratislava to individuals recognised as having done something special for the region and its inhabitants. Pavol Sabela, Director of Oz Stopa Slovensko, a member of the World Habitat-led European End Street Homelessness Campaign since 2017, was honoured, as one of 22 exceptional personalities from the fields of sports, culture, education, healthcare, science, and social affairs. When handing out the awards, Bratislava Region Mayor Juraj Droba (right) said that the winners represent “Ordinary people who do great things.”

As the first social worker in the field of homelessness to receive the prestigious award, Pavol is a unique and deserving winner. He has worked tirelessly to support, house, and help to integrate those experiencing homelessness through his work that is underpinned by evidence, is solution-based, and focuses on long term solutions. Pavol and his team have been the first ones out on the streets of Bratislava to assist in emergency situations, such as the start of the Covid-19 pandemic, and the influx of refugees after the invasion of the Ukraine.

Despite the accolades, Pavol and the local European End Street Homelessness Campaign won’t be resting on their laurels.  Over the summer they will raise greater awareness of the large and unjustified number of empty homes in Bratislava – which has a major impact on housing poverty. Bratislava is a city with a shortage of rental properties for those who cannot afford to buy, the response to homelessness is significantly under-resourced and there is no tradition of solutions such as social housing.

Oz Stopa work tirelessly to raise public awareness and campaign with local and regional politicians for solutions that are long-term, and no quick fixes. Their latest campaign calls for an end to handing out tents, sleeping bags and funding short term shelters that do not resolve or support people away from a life on the streets. 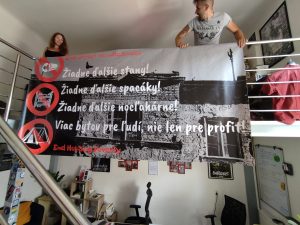 Flats for people not for profit