Home / Back to Rio / Mural in VIla Cruzeiro 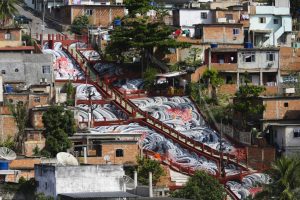 Mural painted in VIla Cruzeiro, a slum in Rio de Janeiro, Brazil by Duch painters Jeroen Koolhaas and Dre Urhahn. The artists came up with the idea of painting the cement staircase – installed to prevent landslides by the city government – after painting another mural in the slum. They originally wanted to paint the entire slum, but soon realized that would be too much. It has helped bring positive news to community known for the dangerous shootouts of police and drug gangs. (Australfoto/Douglas Engle)

20 hours ago RT @insidehousing: Homeownership must not come at the expense of the poorest households, says CIH president https://t.co/4yYFHdgD5v #ukhous…

23 hours ago RT @ThePlanetMark: On #NetZeroWeek we look back at our conversation with Ross Wilson from @IngramValleyGB, a Planet Mark certified farm in…

23 hours ago RT @SolutionHousing: The recording from our session "Relationship between housing policy strategy and the reality of social work" at #ISHF…