This huge scale public arts project has radically transformed the image of one of the most notorious favelas in Rio de Janeiro. It mobilised a community to paint the façades of their houses creating massive works of art. The effect has been to redefine their surroundings and turned a no-go area into a dynamic community.

The ultimate aim of the project is that the painting of the houses in the favela will act as a catalyst for the wider regeneration and empowerment of the area and thereby improve people’s lives.

As a next stage, the project aims to continue, involving painting a further 50 buildings.

Back to Rio is a grassroots arts project started by two Dutch artists, Jeroen Koolhaas and Dre Urhahn, founders of the Favela Painting Foundation. They first visited Vila Cruzeiro in Rio in 2006 and painted a 150 m2 mural of a boy with a kite on the wall of one building. They returned a few years later creating a much larger mural covering a public stairway. This artwork depicted the stairway as a river with Koi fish swimming in it. They returned to Rio de Janeiro in 2010 to undertake a very large community artwork on a big public square in Santa Marta.

After they completed the Santa Marta project, their vision was to do something even bigger and paint a whole favela. Work then restarted in Vila Cruzeiro, in the main street of this favela. This project is called: Back To Rio. A serious gun battle in 2014 temporarily halted the work and also caused them to rethink. They relocated and chose a more visible and public place, partly for security reasons, but also to help create a more positive image for the area after its darkest moment. The project involves painting thirty-four connected buildings creating a vast 7,000 m2 artwork.

The artists initially hired six local young people to take part. Participants were given training in plastering (the houses were bare brick and had to be repaired and rendered before they could be painted). Later in the projects they trained twenty-five young people from the favela in painting and art techniques. Participants were all paid and learned a skill.

The project has drawn positive attention to Vila Cruzeiro in particular and Rio’s favelas in general. The brightly-coloured paintings have received wide scale international media coverage and the area has hosted several celebrity visitors. For the first time the media was reporting positive news from the Favelas. Santa Marta is now a tourist destination, with regular organised tours provided by locals for visitors to the city.

Vila Cruzeiro is an informal settlement (favela) in Rio’s North Zone. It has a reputation for criminality and violence. In 2010, The Rio Times described it as “one of the most dangerous favelas in Rio.” It went on to say “The zone is responsible for over one third of the city’s murders and a common cause of death amongst inhabitants is stray bullets”. The settlement was built in the early 1970s and most of the buildings have been little improved since. In 2010, the area was targeted by police aiming to break a local drug gang. A street gun battle ensued, which lasted five days and resulted in the death of 37 people.

Estimates vary on the number of people living in Rio’s favelas, but in 2009 New Yorker magazine estimated that the city had more than one thousand favelas, inhabited by three million of the city’s fourteen million population. This number has almost certainly increased in the years since, with most of the city’s population growth occurring in favelas.

Back to Rio has delivered training and capacity-building within communities in some of the poorest neighbourhoods in Rio.
The project has attracted significant media attention, both nationally and internationally and has helped to change people’s perceptions of the favelas.

Back to Rio is funded by a continuous fundraising campaign. The project was set up after a successful US$100,000 KickStarter crowdfunding campaign. It has been sustained by further crowdfunding, donations, private money from Haas&Hahn and a grant from the Johnnie Walker Foundation.

Whenever possible, the painters experiment with coloured plaster; using pigments in plaster instead of paint which is then sprayed onto the houses which, in the long term, is more sustainable. To support this, a Dutch team of residents from Vila Cruzeiro are currently setting up a pilot for a self-sustainable paint factory in Providencia (another Favela) which will be used to transform even more houses and, if successful, export the paint to other places where favela painting projects are happening.

The financial sustainability of the project depends on the successful use of innovative funding mechanisms, for example crowdsourcing.

Despite safety having improved in Vila Cruzeiro, the project has been halted due to the ongoing conflict between the police and drug gangs, which led the project to move to another more central and safer location.

The project is heavily reliant on the two Dutch artists being on site. They immerse themselves in the community, which is one of the success factors of the project because it allows them to develop an in-depth local understanding and the creation of local teams, but it also makes it very time-consuming.

All the tenants and homeowners living in the streets where the project takes place need to be willing to get involved in the project and all of them need to come to an agreement on the design and colour scheme of the art work. The project has developed a methodology using colour-lab workshops in which people come together to make a first draft together. These workshops can also convince homeowners who were not yet sure about their participation.

Locally, results are evaluated, changes implemented and re-evaluated by the local crew leader until everyone is satisfied.

The longer-term impact of the project has not as yet been evaluated.

The project started with one mural in a favela in Rio and has since been replicated in Port-au-Prince (Haiti), Philadelphia (USA), Gothenburg (Sweden) and Willemstad (Curacao).

The project ‘Germen Crew’ in Mexico painted an entire informal settlement in Pachuca City was inspired by Favela Painting. 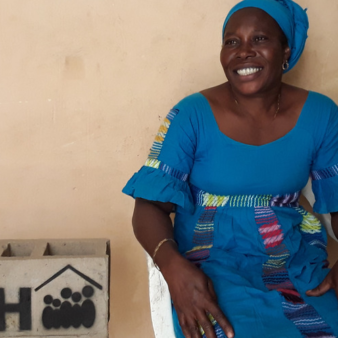 UrbaSEN and the Senegalese Federation of Inhabitants

14 hours ago ⭐️𝙒𝙀𝙀𝙆𝙀𝙉𝘿 𝙍𝙀𝘼𝘿𝙄𝙉𝙂⭐️ At World Habitat we agree and design a variety of support packages to help our Gold Award winn… https://t.co/KCv6KLdj7h