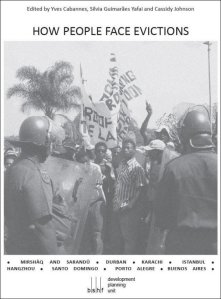 Forced and market-driven evictions are increasing dramatically worldwide, with devastating effects on millions of children, women and men across the globe. Despite this negative trend, however, many people-led initiatives have been successful in addressing this issue and reducing the number of evictions, developing new policies and proving that alternatives to forced eviction can be found.

This project aims to document, reflect upon and share people-based initiatives and experiences of struggles against evictions, including how groups are securing rights to adequate housing, legal security of tenure and freedom from arbitrary destruction and dispossession, giving voice to people who are active on the ground and providing an opportunity for exchange and mutual learning.

The research has been coordinated by the Development Planning Unit (DPU) of University College London, with the support of the Building and Social Housing Foundation (BSHF), and carried out with a range of grassroots organisations, networks and activists in different parts of the world.

The project has been carried out in two stages, initially focussing on documenting the experiences and examples of good practice through the preparation of narratives by local groups who have faced or are currently facing forced evictions the cities of Buenos Aires (Argentina), Porto Alegre (Brazil), Durban (South Africa), Hangzhou (China), Istanbul (Turkey), Karachi (Pakistan) and Santo Domingo (Dominican Republic), as well as in the rural villages of Mirshaq and Sarandu in Egypt.

The second stage of the project has focused on sharing these experiences – both amongst the various groups involved and to other groups currently facing forced evictions – through an international exchange event held in Istanbul, one of the participating cities, in February 2010. Following the documentation of the individual cases and inputs from the exchange seminar, a cross-sectional analysis has been prepared with key lessons and themes drawn from the various cases, along with concluding remarks on issues that have emerged as part of the discussions and documentation process.

The central focus of this report is on the practical strategies and experiences of communities who have directly struggled against forced evictions. Many of these experiences offer valuable lessons for other groups facing similar issues and it is envisaged that the groups involved, as well as the many other groups around the world confronting similar issues, will benefit from the documentation of these diverse experiences and solutions and identify cross-cutting themes.

Thanks for downloading our publication!

If you’d like to keep up-to-date with the latest World Habitat news and events, why not sign up to our newsletter? Just enter your email address below.

Thanks, you have subscribed to the World Habitat Newsletter.