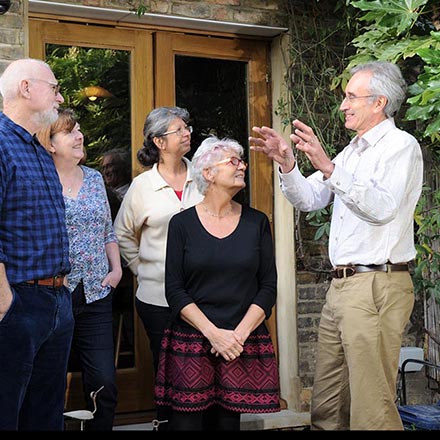 When a group of like-minded people with different backgrounds began discussing their common responsibilities of caring for elderly parents, it sparked discussions about an alternative independent future in later life. The idea for Cannock Mill Cohousing Colchester, a group with plans for a shared development of 23 eco-friendly homes and shared facilities, was born.

The idea was to establish a group that would build a bespoke housing development, living together in individually owned properties, sharing land and facilities. The group’s members think of it as a dynamic, growing community, where they will live independently and democratically share the responsibilities of managing the properties and connected activities and interests.

Phil McGeevor, 64, a retired academic registrar, one of the group’s members and also Vice Chair of the UK Cohousing Network, recounts, “I thought I would stay in our house until I no longer could, and would then have to look at what options were available. The choices for later life seemed very constricting.” For most of the group, he added, “this will be one of the most exciting and important things we’ve done in our lives, and the fact that has given us options in old age that most people could only dream of, that independence and community, that sense of support, of living the right way, is such a wonderful thing.”

Group member Eve Tibber, 57, a retired economist and a cooperative specialist, feels the increasing numbers of people becoming socially isolated are a key driver for cohousing schemes such as this. “Cohousing is so important to society, because society is becoming increasingly more isolated. There are a lot of people living alone, young and old, and people have less time for human relationships”, says Eve. This type of scheme, she says, offers benefits for sustainability “on a housing level, on a society level and on a human level. If you are living completely alone everything in your life is a responsibility and takes a lot of your time. But if you are living in a community like ours it makes everything easier. We’re also designing a place where people can meet, and we can invite other members of the local community to meet with us.”

“It’s the sense of belonging that’s one of the greatest attractions of cohousing”, says Lesley Scordellis, a 64-year-old retired fundraiser. “One of the great social ills now is isolation. Life has become more difficult for several older people I know, and they’ve retracted more into their homes. That can’t happen with cohousing because there are people around you, a huge benefit particularly looking into retirement – you have a family around you all the time.”

The site the group eventually chose after much time seeking a suitable location was the grade II listed Cannock Mill in Old Heath, Colchester, England. They felt the combination of the land, the position, good local facilities and a lively community, within easy reach of London (where many of the group currently live), made it ideal. Since purchasing the site in 2014 they’ve welcomed new members to the group from the local area and elsewhere, expanding on their original London-based roots.

Architect Andrew Thorne, 65, was among the founder members of the group more than ten years ago. He emphasises that the trust developed within the group has been crucial to its success so far. “When we bought the site it was a huge leap of faith, but we trusted each other and that was why we felt able to move forward without really knowing if the next stage was achievable. Unless you take things one step at a time you’re never going to get the whole thing lined up.”

The fostering of community spirit, shared investment and togetherness is built in to the culture of the group, and there’s a strong commitment to ensure any new members quickly feel they play an equal part. When each member buys a property in the development, they’re actually getting much more – a stake in a large piece of land, in the common house and in the new community. The group members are all directors of the company that own the site, and they will lease their properties for a 999-year term. The company’s rules ensure that members commit to the community’s values, and measures are in place to make sure the community spirit continues for future generations of owners at Cannock Mill. Those who are unable to commit now but are interested for the future can register to be considered when an opportunity arises.

“What we’re trying to do is in a way not very different to what villages do all the time”, says architect and group member Ian Blackburn, 64. “With this being an intentional village it allows those planning it to live there and to design it for themselves but also to last beyond their own tenure. That’s a very exciting thing to be pioneering, and it certainly feels very pioneering to be doing it. That’s probably one of the strongest things that bonds the group together.”

As part of the development, the group also share a commitment to ‘living lightly’, making as little an impact on the land and environment as possible, while contributing as much as possible to the local community beyond their immediate surroundings. The group has planning permission for 23 new homes of different sizes, which will be designed by their specialist architect, also a member of the group, to Passivhaus standards to achieve high energy efficiency, a low carbon footprint and low running costs. They aim to operate a car pool, buy from local suppliers and be as self-sufficient as possible, intending to have an allotment project on site to grow their own produce.

Though togetherness, persistence and determination has been essential to drive the process, Andrew Thorne is under no illusion that the skills held by the group have been fundamental. Between them, members of the group possess professional skills in architecture, design, planning and project management. “There’s a big pioneering spirit but we have to be honest, we have capabilities between us that makes this possible”, said Andrew. Barbara Simpkins, 70, a retired education consultant, was another of the founder members and agrees that their blend of skills have given them a unique opportunity to get to grips with the site’s particular challenges that were likely to have been off-putting to private housebuilders. “If we added up the hours we’ve spent using our skills and expertise on the project which has cost us nothing, how much would it have cost a developer to make this happen?”

Now they’ve secured the site and planning permission it’s full steam ahead towards the build phase. The group are currently in discussion with a preferred contractor and are aiming for work to be completed by late spring 2018.

Phil McGeevor believes that this type of living ought to be scaled up across the country for people of all ages and stages of life, and be more readily available, as is already the case in a number of European countries and the USA. “There really is a lot of enthusiasm and need out there, people like the concept, would also love to make it happen and it should be an option – why can’t people rent houses that also have these kinds of facilities? People buy houses at this kind of price, why can’t they buy houses of this type?”

7 hours ago RT @NinaPompeu: Proud of our collective work and the community we have created in the fight for the #RightToHousing and the #RightTotheCity…

7 hours ago RT @AndrewTatarsky: I am so appreciative of the work that @CrisMerendeiro and @CRESCER_org are doing. For free papers on harm reduction ps…

7 hours ago Such a great week at @WUF_UNHabitat #WUF11 #Katowice thanks to our host @UNHABITAT & everyone we met at the… https://t.co/G3y69z3YJ7