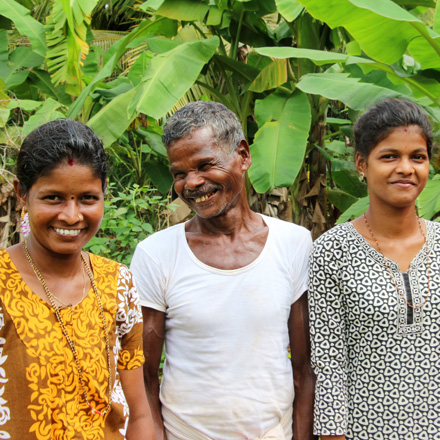 A transformative initiative supporting the Koraga people and nine other tribal communities in the state of Karnataka to access land for the first time has today been named a Gold Award Winner in this year’s World Habitat Awards.

ActionAid India’s Restoration of Dignity and Human Rights of Indigenous Tribal Community in Karnataka project – working in partnership with the NGOs the Koraga Federation and Samagra Grameena Ashram – has secured thousands of acres of land for tribal communities and 19,000 people have accessed grants to build homes. This has acted as a foundation for them to rebuild their lives. A state-sponsored nutrition programme has improved food security and health among the Koraga community, and now more children attend school and have access to scholarships. Koraga women increasingly hold leadership positions within the community and more than 1,000 have become self-sufficient.

The Koraga tribal community suffered centuries of oppression under India’s historic caste system. While caste-based discrimination is technically illegal today, many of the practices and prejudices remain. These include ‘Ajalu’, where Koragas are made to eat leftover food from upper caste households mixed with hair, fingernails and other inedible substances.

Through its community-led approach, the project empowers marginalised tribal groups to access their basic human rights, restoring their dignity and transforming their lives for generations to come.

Gowri, who lives with her husband and four sons, became the owner of an acre of agricultural land. She said: “Before land was allotted to us, I used to work as a labourer in the houses of upper caste people. We were treated as untouchables. We were doing long hours of work; it was a painful struggle of life. Now, we have obtained homestead land and have constructed a decent house which depicts our dignified living. Now our efforts are to support and ensure every Koraga claims their right to land for a decent survival and dignity as land is inextricably linked to dignity. With pride, I wish to say that land is a breakthrough in my life to come out of the oppression. Now I am self-reliant!”

David Ireland, Chief Executive of World Habitat, said: “The caste system is now illegal in India but tragically, its legacy remains. There are few communities across the world who have been discriminated against to this level. The way this project has tackled this discrimination – through encouraging self-sufficiency of building homes, growing food and other support – has transformed the lives of an entire ethnic group.”

The World Habitat Awards judging panel said: “This is a very strong rights-based project focused on empowerment – supporting this community to realise there is a way beyond what they have always known. With people very much at the centre, this is so much broader than housing – the Koraga tribe are for the first time in history being treated as human beings and claiming rights they were already entitled to.”