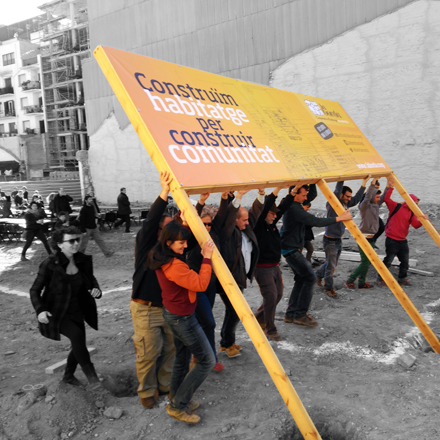 A housing co-operative using a pioneering ‘grant of use’ model on public land has today been named a Bronze Award Winner in this year’s World Habitat Awards.

A group of residents in Barcelona set up the co-operative with the aim of creating an equal, intergenerational community and providing an alternative to homeownership, the rental market and public housing. Construction began in 2012 and in January 2019 residents moved in. The building comprises 28 apartments, which house 60 people in the Sants neighbourhood of Barcelona.

In a city with soaring rents and unstable tenancies, La Borda has provided its members with a secure and more affordable home.

Retired resident Rosa, aged 67, said: “I had always dreamed of growing old surrounded by people who brought me vitality, with their ideas, their music, their longings, and their youth. In the co-operative La Borda this dream is coming true. I feel accompanied by the whole community. When the little ones arrive from school the house is filled with their voices and laughter. From my current situation as a retired adult I can contribute a part of my time to deal with emergencies, both in care and other needs, organise collective meals, attend to the plumber or collect clothes from the clothesline. Feeling useful to the community makes me grow and I think that’s how we enrich each other.”

David Ireland, Chief Executive of World Habitat, said: “La Borda has created an environmentally sustainable building and way of living. This provides a blueprint for how a good standard of living can reduce its impact on the climate emergency.”

The World Habitat Awards judging panel said: “It’s hard to break away from the historical housing path, but La Borda has managed it. It is a precedent for what is possible in co-operative housing and they have achieved the construction of a beautiful building in an expensive city.”