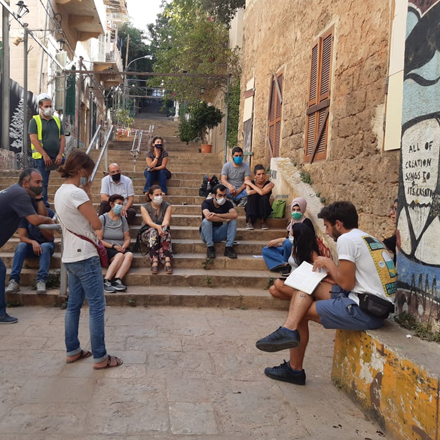 A housing rights project in Beirut which uses an online reporting tool to monitor and respond to housing injustices, including evictions, has today – Thursday 16 December 2021 – been named a Gold Award Winner in this year’s World Habitat Awards.

Housing Monitor is a housing rights project in Beirut run by Public Works Studio. It provides a safe and secure database for people to report housing violations and injustices. Public Works Studio responds to individuals’ housing needs with access to legal and social services, building awareness among vulnerable groups, including low-income Lebanese, refugees and migrant domestic workers, who have limited legal representation and/or knowledge of their rights.

The project has received 603 reports of housing injustices since January 2020, of which 472 cases were responded to with targeted interventions. So far, it has prevented the eviction of 92 households and negotiated better housing security for hundreds of people.

Housing Monitor mobilises local advocacy efforts to demand housing policy reform. As the first project of its kind in the Middle East and North Africa region, Housing Monitor is giving vulnerable communities a voice to demand their basic housing rights and campaign for a more equitable society.

Maimunah Mohd Sharif, Executive Director of UN-Habitat and World Habitat Awards Final Judge, said: “COVID-19 has particularly underlined the crucial need to strengthen resiliency and promote more inclusive and just societies. Reducing urban inequalities is a cornerstone to ensure we are all better prepared for future shocks and crises. We particularly appreciate initiatives that put people, especially from marginalised groups, at the centre by tailoring solutions on their needs and empowering them to be agents within the process. This initiative perfectly aligns with our work in 2021 on improving the governance and management of land as well as the prevention of evictions, particularly in the case of housing discrimination. This project is a successful and scalable solution to achieve adequate housing for all.”

Leilani Farha, Global Director of The Shift and a Final Judge of the World Habitat Awards, said: “In light of the economic instability faced by many across Lebanon, Housing Monitor is a timely and sorely needed project, providing tenants with access to the legal information and knowledge they need in order to remain in their homes. Housing Monitor is the right to housing in action – using law and legal mechanisms to address discrimination in housing and preventing evictions, and the tenants from being evicted from their homes, and falling into homelessness.”

David Ireland, Chief Executive of World Habitat, said: “Without accountability and transparency, malign forces can act with impunity. Low-income people in Beirut are subjected to countless examples of spatial injustice. A weak state does little to uphold tenant rights. Forced evictions, harassment, and displacement of people for private gain are rife. Housing Monitor shines a light on the injustices and empowers people to be able to report violations – evictions, abandoned properties, properties built without permission – and it holds government, companies and property owners to account. This is an essential building block in the right to housing.”

The World Habitat Awards Advisory Group judging panel said: “This is something so inspiring in the bleak situation of Lebanon. It is extraordinary. They deal effectively with the issues of refugees, migrants, domestic workers. What I find amazing is that they are very committed with a clear strategy, producing maps and knowledge with the participation of people, at the same time playing an advocacy role. This housing rights approach is so inspiring and unique, working with discriminated populations in a bleak environment.

“There is real value in the dataset which comes out of this simple technology, on the housing conditions of an unrepresented, large proportion of the Lebanese population.”