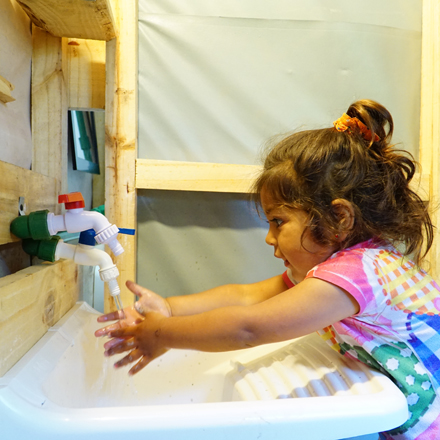 A project which addresses the lack of sanitation in informal settlements across Argentina by installing bathroom and kitchen modules in hundreds of homes, has today – Thursday 16 December 2021 – been named a Bronze Award Winner in this year’s World Habitat Awards.

Sanitation is a neglected issue in Argentina, where six million people do not have access to a bathroom inside their home. Many of these people live in informal settlements where less than 4.8% of the population has access to adequate sanitation. Infection and disease are commonplace and acute diarrhoea is one of the leading causes of illness and death in children under five in Argentina.

In 2015, Módulo Sanitario became the first organisation in Argentina aiming to tackle this problem at scale by installing prefabricated bathroom and kitchen cabins in people’s homes. Beneficiaries work closely with volunteers, building a septic tank and contributing 11% (around $8,500 AR or $90 USD) of the cabin’s cost before construction begins.

The cabins are assembled over two days and include: hot and cold-water facilities; drainage; electricity; a sink; space for an oven; hand-washing sink; toilet; shower; and heating. Each household is given hygiene training and a kit containing soap, toothpaste and detergent, among other items.

So far, Módulo Sanitario has installed more than 650 sanitary cabins and aims to construct another 1,600 by 2023, reducing the risk of disease and improving the quality of life of thousands of vulnerable people in Argentina, and eventually in other Latin American countries.

Ana Garófalo lives in an informal settlement in Pilar, Buenos Aires, with her children Abel and Kevin who have health issues. A clean and dry bathroom is essential for Kevin’s recovery from surgery. She said:

“We were practically living in the hospital because it was very damp in here, and it affected him a lot. Having a private bathroom drastically changed everything. When Módulo Sanitario came to us, it radically changed our lives in every aspect. There are countless families living my same story, in appalling conditions. Thanks to Módulo Sanitario, families like us can have access to a bathroom, to a decent hot shower, like everyone else. There is nothing more essential than having your own bathroom.”

“Good quality sanitation is critical to both public health and to safety. Toilets and bathrooms shared between many houses risks spreading disease. It also makes women and girls more vulnerable to rape and other forms of gender-based violence. The right to housing is not fulfilled if people don’t have exclusive access to bathrooms. This project retrofits bathrooms and toilets into simple houses that weren’t designed to include them. It requires ingenuity and skill, but massively improves the quality of life for their inhabitants.”

“Sanitation is an urgent issue in Argentina, and even more so at the time of the pandemic, this project is important in its efforts to improve the health of vulnerable families.”