Home / News / Press Releases / Getting to know who is out there

Getting to know who is out there 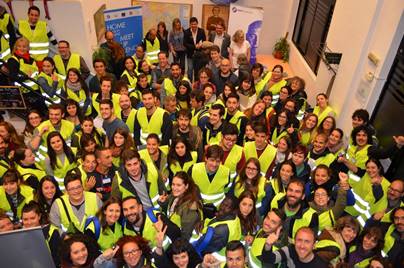 A European End Street Homelessness Campaign seeking to end street homelessness in participating European cities by 2020 has launched. This work is part of a Europe-wide initiative being co-ordinated by World Habitat, working closely with FEANTSA and Community Solutions Inc.

Valencia (Spain), Barcelona (Spain) and London (UK) are the first cities to take part and all at different stages of completing a ‘registry week’. This is an intense activity based on a simple idea: communities should get to know every homeless person by name by going onto the streets to find them and assess their needs and vulnerability. Not a count but a way of understanding who the people who live on the streets really are, what their lives are like and how vulnerable they are.

This week from 11 – 14 July in central London Westminster Homeless Action Together will conduct a registry week. The registry week is the first time for years that many organisations have worked together on a single project. London already has some of the most sophisticated data on homeless people of any city. St Mungo’s is one of a group of homelessness charities involved plus over 250 volunteers.

Director of World Habitat David Ireland said: “Solving homelessness is not easy, but experience from the 100,000 Homes Campaign in the USA tells us it is possible. And the first step is identifying and understanding who the people are living on the streets and what needs they have. These cities are beginning to have a clearer insight into the people who are homeless and this is integral in ending street homelessness.”

The three cities taking part in the campaign have recruited and trained hundreds of volunteers from their communities who comb the streets of their city to find as many people sleeping rough as possible and ask them to complete a set of in-depth questions that seek to provide detailed information about people’s needs. The same questionnaire is used in each city (translated into the relevant language and with small changes to reflect local circumstances). The process occurs during the night to ensure that those surveyed are street homeless.

In April, Rais Fundación carried out a registry week in Valencia. Nearly 300 volunteers surveyed homeless people in the city. The results were highly significant and revealed that there were 404 people living on the streets.

A further registry week is due to take place in the south London borough of Croydon in August.

World Habitat (World Habitat) works both in the UK and internationally to identify innovative housing solutions and to foster the exchange of information and good practice.