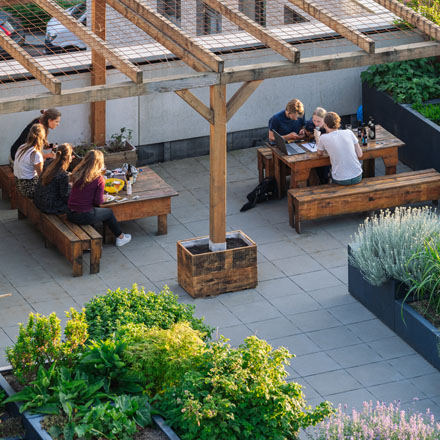 A social housing estate in Eindhoven in the Netherlands, whose residents – including people with disabilities and those living with autism – have been an integral part in its initial design, development and management, has today been named a Silver Award Winner in this year’s World Habitat Awards.

Space-S, a collaborative project designed and developed by Eindhoven architects’ firm, Inbo; housing association Woonbedrijf; and the residents themselves, offers high-quality affordable housing in an inclusive community, on the former industrial base of electronics giant Philips. It is a hugely successful example of a project that has taken the principles of community-led housing and applied them to a housing association development.

More than 1,000 prospective tenants responded to an initial open call to participate in the design of the space, through inclusive and accessible workshops. Around 600 residents continue to manage many aspects of the estate and to initiate new ideas for its development, creating a continued sense of resident empowerment and community cohesion.

The development provides high-quality accommodation for around half the price of a similar apartment in the city centre and encourages people of all age ranges to live side-by-side. It includes homes for young people with learning difficulties, for people with autism and accessible to people using wheelchairs.

Resident Thursten, aged 28, has autism and lives with his girlfriend at Space-S. He said: “The great thing about Space-S is that it’s a mix of people. This makes it easier to come out of your shell and get in touch with others. It is much more accessible, the limitations here are much smaller. Space-S doesn’t solve all of your problems, but if you live here it’s much easier to meet new people and to get in touch with others. You’re not special, you’re just one of the group! That’s Space-S.”

David Ireland, Chief Executive of World Habitat, said: “Most Housing Associations in Europe and beyond know that resident involvement and participation is important for successful housing – but I don’t know anywhere where the principle has been taken so fundamentally as Space-S. Residents were involved in every aspect of design from the very beginning. As a result, this is a social housing estate that is based around what the residents need and want – including those with disabilities and autism. If social housing providers want an example of how to develop a great and inclusive housing estate, they couldn’t find a better example than Space-S.”

The World Habitat Awards judging panel said: “The amount of public participation and real community engagement which has taken place – which is hard work and takes time – has brought in and created a mixed community. They’ve obviously developed community spirit through that.”