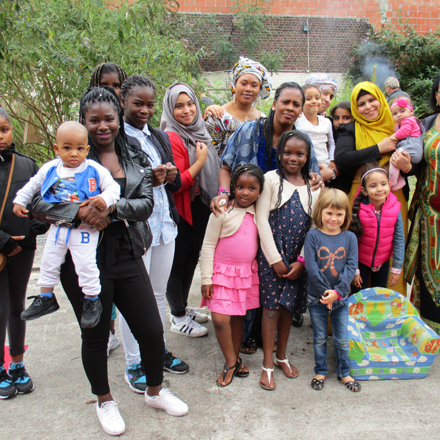 A project which has created permanently affordable homes for people on low-incomes in Brussels, while inspiring organisations in other European cities, has today – Thursday 16 December 2021 – been named a Gold Award Winner in this year’s World Habitat Awards.

Rising house prices and a lack of social homes has created an affordable housing crisis in Brussels, that leaves people on the lowest incomes with little choice but to rent low-quality accommodation or leave the city.

Community Land Trust Brussels (CLTB) has successfully advocated for the use of the Community Land Trust model in Belgium to address this growing problem. Funded primarily by Brussels Capital Region, CLTB develops affordable housing on community-owned land. The homes are bought by people on low incomes, most of whom (over 80 per cent) have a migrant background.

Residents play a central role in both the governance of the organisation and in the design and management of the housing projects. Homes are sold at 30-50 per cent below market equivalents with the cost of the home subsidised according to the household’s ability to pay. Residents and non-residents also have the opportunity to participate in a cohesive and caring community.

CLTB has completed five projects, housing 450 people in 103 homes. Four more projects are in preparation and the organisation is strongly committed to expanding the Community Land Trust model throughout Europe and beyond.

CLTB is beginning to influence official policy in the Brussels Capital Region, where the Housing Emergency Plan states that mainstream affordable housing providers should start to apply mechanisms to create permanent affordability inspired by the CLT model. The organisation aims to provide housing for 1,000 people by 2030, ensuring a pipeline of truly affordable and inclusive homes for marginalised groups whose voices are rarely heard.

Fatima moved into her flat in Molenbeek about a year ago, she also helps to organise the Bazaar Festival – a monthly flea market – which strengthens cohesion between the residents and their neighbours.

“I was in a difficult housing situation, because I was living in a quite small and very expensive flat. I said to myself, “This is not possible, I have to find a way to do something. I was interested in the idea of having a home, where I could be at peace, without being stressed about a possible increase in rent…or a problem with the owner. I really liked the values of Community Land Trust Brussels, the idea of helping each other. We…had our ups and downs, but we…learned to understand each other’s difficulties, to find solutions together. Now we all have our own flats and when we meet in the halls, it is always polite and friendly. I’m happy to come home, which I didn’t have in my previous apartments.”

Maimunah Mohd Sharif, UN-Habitat Executive Director and a Final Judge of the World Habitat Awards, said: “COVID-19 has particularly underlined the crucial need to strengthen resiliency and promote more inclusive and just societies. Reducing urban inequalities is a cornerstone to ensure we are all better prepared for future shocks and crises.

“This project perfectly aligns with our work in 2021 on improving housing affordability. We appreciate the focus on addressing housing unaffordability, which prevents people from tapping into the opportunities that urbanisation carries. The affordability crisis pre-existed COVID-19 and was a strong driver of its disastrous effects. At the same time, the challenge of better understanding how to increase access to quality and affordable housing has been made even more urgent by the growing income instability triggered by the economic spill overs of the pandemic. This project is a successful and scalable solution to achieve adequate housing for all.”

Leilani Farha, Global Director of The Shift and a Final Judge of the World Habitat Awards, said: “This project enables low-income families – who are normally shut-out of the housing market – an opportunity to own a home, without it being prohibitively expensive. And not only does it provide families with security, but it also allows for intergenerational stability. The work of Community Land Trust Brussels sends an important message – that in order for low-income households to access secure, affordable housing, then creative, non-market-based alternatives are required.”

David Ireland, Chief Executive of World Habitat, said: “Community Land Trusts are one of the most important ideas of the last hundred years. Land is a finite resource, but the free market does not share it out equitably. Increasingly the free market does not work for those on lower incomes. Social housing provides an answer, but it can never keep up with the ever-increasing demand.

“Community Land Trusts, along with other forms of community-led housing, provide an answer, decoupling land ownership and property – it lowers housing costs and gives people a greater say and greater freedom to live their lives how they want to. Community Land Trust Brussels is the first big Community Land Trust in Europe – it’s a trailblazer by providing affordable homes for people on lower incomes in an expensive city. It has developed and grown and become a model inspiring and helping many other Community Land Trusts to form across Europe.”

The World Habitat Awards Advisory Group judging panel said: “CLTB is very much about their relationship with people – the one-on-one contact even before people become residents. It provides the opportunity for home-ownership in a stressed market where they would never otherwise have this ability. The price of land is a major issue across Europe, particularly in urban areas, and they aim to address this issue for people who are the most excluded from the housing market. It’s a welcome addition to housing policy and is becoming popular across Europe as a clear example of success.

“They have managed to mainstream the CLT in the European Union, which is extremely important for supporting transfer across other European countries. This has been a major shift and they are superb advocates of the model. The successful integration and inclusion of residents from so many different nationalities is amazing.”