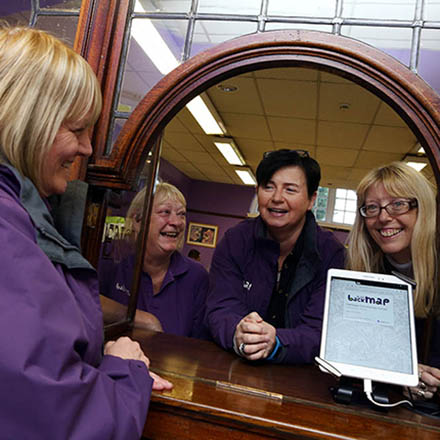 An award-winning community charity in Sunderland, England is making a huge impact revitalising a poor neighbourhood and changing people’s lives.

Back on the Map in Hendon, Sunderland, originally began in 2001 as the New Deal for Communities Partnership. Since then the charity has gone from strength to strength, with those involved determined to establish it as a cornerstone of the community. Their base, the Carnegie Community Corner that they took on from the council and renovated in 2014, is now a bustling, multipurpose centre in the heart of the neighbourhood, run by four staff and 29 volunteers, offering a variety of services, including classes, meeting and activity spaces, an IT zone, and the largest community library in Sunderland.

Back on the Map’s goals are to create a better place, a stronger community and facilitate an influencing role for local residents, and a main focus is now on regeneration of housing in Hendon. Jen McKevitt, Trust Director, explains that this was a locally-led decision from the outset: “When the New Deal programme was coming to an end we carried out a large local consultation exercise, asking residents what they would like a new charity to focus on and housing came out top.”

The reason for this was identified by Back on the Map as the large proportion of poorly maintained, often empty houses in the hands of private landlords, bought cheaply. Local streets in middle Hendon and an area known as the ‘Long Streets’, were run down, tenants weren’t being vetted and the neighbourhood began to suffer from criminal activity with drug dealing and related antisocial issues commonplace.

“A once thriving and friendly community that had grown up together across generations had become totally fractured,” said Jen. “This is why we got into housing. We felt that someone needed to recognise the problem and do something about it so we financed a selective licensing scheme for private landlords in the area from 2010 to 2015 and over a few years we bought 62 empty or landlord sale properties and refurbished them using empty homes grants from the Homes and Communities Agency. We aim to create a better standard of housing and higher standard of service for local residents; returning what were previously well-maintained houses back into a good state and back into local hands.”

Originally working with housing association partner Gentoo to manage the lettings, Back on the Map later took the decision to control this themselves, handled by Elaine Sherriff, Finance and Housing Manager. A third of the revenue generated by the rents, all set at affordable levels at or below Local Housing Allowance rate, goes back into property improvements and repairs with the remainder supporting Back on the Map’s wider community activities. “Prospective tenants have to go through a vetting process with the council first, and we ensure they don’t any criminal history, financial arrears, and also that they have some links to the local area,” explained Elaine. “We want people to stay long term, to be part of the community, so we aim to get our tenants along to the Centre to get involved. A number of our new volunteers are also our residents and they love it.”

Many residents have had poor experiences of previous housing, including Martha Potter, a mum of four. She described what life was like before discovering Back on the Map: “Either side of the place I lived there were problems with drugs. It got to the point where my children, including my daughter who was three, were picking up syringes from the garden. I was living with damp, beetles, and the floor collapsed but the landlord wouldn’t repair it.” After moving into a property with Back on the Map the family has a new lease of life and hasn’t looked back. “I’m so much happier, it’s affordable, warm, and I can’t fault Back on the Map. If there’s a problem they listen and act straight away. The community here feels much closer, people are getting together and getting involved more. I drop in to the centre and the kids love it.”

The programme is hugely successful, and highly rewarding for Elaine Everett. “The biggest feeling of reward is when people turn the house into a home. That gives us all a sense of pride and achievement, seeing someone happy and enjoying living there, looking after it and wanting to stay there.”

Retired couple Sandra and Bill Thompson found Back on the Map when their world was turned upside down in later life. For 45 years they’d lived without worry in a house they bought from the council and expected to stay there for the rest of their lives. But when seven years ago Bill became ill and had to undergo a triple heart bypass, financial difficulties followed and they struggled to pay their mortgage. Their son stepped in to take over the mortgage but then got into his own financial difficulties and, no longer able to pay the mortgage or his own rent, the couple were evicted.

“It was heart-wrenching to have to leave”, recalled Sandra. “We had nowhere to go and were desperate.” Husband Bill also described the trauma: “Losing our house was a tremendous shock and hit us both hard. I was depressed and I’m still on medication now. It turned everything upside down and you feel ashamed to tell anyone. It also caused a rift between us and our son.”

Through volunteering in the centre, Sandra found out more about Back on the Map’s properties, which proved to be the turning point. “I got in a bit of a state and spoke with Elaine who asked if I’d be interested in a property that was becoming available. When I saw it I was over the moon, l knew it would become my home. We’ve been in this house for a couple of months now, the people here are very friendly and there’s a great community spirit. There should be more work like this done to bring houses back into use for people in need.” Having been born in Hendon, Bill has come full circle and the couple are now looking forward to celebrating their 50th wedding anniversary. “This house has given us a new life, we can move on,” he said.

Most recently, Back on the Map has partnered with the Housing Strategy Team at Sunderland City Council to buy and refurbish five empty homes, optimising resources and working creatively together for positive change. Having achieved so much, Back on the Map now has further ambitious plans to expand their model of property management in the area. “With 800 to 850 properties still managed by about 350 private landlords here, there’s much more to do”, said Jen McKevitt. “We’re properly established now, financially sustainable and know how to manage the properties and tenancies. We plan to buy 15 more houses, but to have the impact we really want, we need to expand that further so we’re talking to other groups that own property in the area to see if we can take those on. Then we could have hundreds of properties in local control, better managed and contributing to a better community, and the income they generate can fund more activities to support the community in the future.”

“Back on the Map will never leave Hendon and will always be there to do the absolute utmost and invest in improvements”, said Jen. “Our agenda is not about our profit. All the negative impact of certain landlords and tenants completely lost any sense of control for local people. Their community and their influence within it had eroded, their ability to have social interaction with their neighbours had eroded. And we’re building that all back up again.”

3 hours ago RT @SuchiComments: @TheJagaMission - an idea - turned into - sustainable & replicable model - paved an answer to urban challenge like slum…

11 hours ago 🏡Are you solving a #housing problem? We're looking for practical, innovative & sustainable solutions to housing c… https://t.co/2dIXOOZL02

11 hours ago RT @yiorgos_pap: Can we learn from your solutions to the #housing challenges we face? Apply by Sunday 12 March 2023. #AffordableHousing #E…