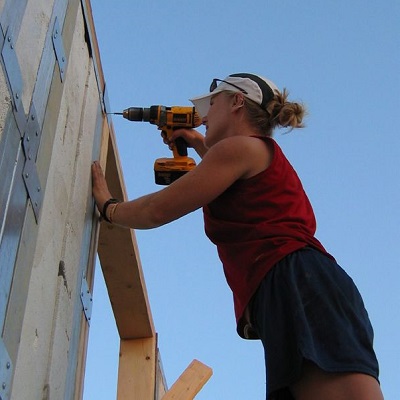 In the UK we are often set on the idea that young people cannot escape their own housing crises let alone aid those who are also in housing need.  We are fuelled by regular headlines pointing to youth as victims, such as ‘Housing crisis: 6.6 million young Britons can’t afford to leave home’, ‘Young Britons living in ‘suspended adulthood’ research finds’ and ‘Zero-hours contracts ‘trapping young people in homelessness’ charity warns’.  A lack of resources, guidance and dampened spirits make it seem impossible for youth to stand up and help others in need when they are already facing difficulty themselves. It appears the housing crisis is too overwhelming to solve.

However, it is promising to see recent events where young people are coming together to create action. In 2016 the National Union of Students (NUS) in the UK organised rent strikes to highlight the issue of unsustainable student rents. At University College London (UCL) this resulted in a successful rent freeze and new £350,000 bursary fund for disadvantaged students. The number of young people volunteering is also rising rapidly. Timebank suggests that 24% of people aged 16-25 participated at least once a month in formal volunteering with 38% taking part in informal volunteering at least once a month. These successful attempts demonstrate how young people do have the energy and motivation to create change. In my eyes this energy needs to be harnessed to allow young people to move away from the idea of a ‘victim’ in housing.

If we look internationally we can find excellent examples of projects which inspire youth to lead and create creative housing improvements for those with severe housing need. This is fantastically shown in two of our World Habitat Awards finalists, ecoMod and TECHO – Development of Habitat, which both involve young people learning how to improve the housing of those vulnerable in society.

ecoMod was developed by the University of Virginia in 2004 and involves the knowledge of architecture and engineering students in the development of homes for those on low incomes, in partnership with Habitat for Humanity and Piedmont Housing Alliance. The scheme incorporates the building of homes into students’ curriculum giving them real life hands on learning experience and helping to change ideas about who traditionally designs, builds and provides affordable housing.  This concept has been termed ‘service learning’; learning that benefits the local community as well as those studying at the university.

‘Service learning’ allows students to consider their social value as engineers or designers. As one member of the ecoMOD students said, his involvement allowed him to ‘Rethink my goals and responsibilities to society as an architect’.

Another stated how ‘ecoMOD’s goal of attractive, energy-efficient, low-cost housing forces us to consider a wide variety of the impli­cations of our designs. Addressing the issues of energy efficiency, an aging population, and low-income housing not only educates students but also prepares them to address a number of cultural and socio-political topics that will be prevalent in the coming years.”

Including practical work in the curriculum signifies an appetite for academia to become more linked to social need, increasing impact beyond university walls in more relevant research.

ecoMod homes are environmentally friendly prefabs with low energy costs for low income households. This is innovative due to the fact these are often only available to wealthier populations. Since becoming a finalist in 2009 the ecoMod concept has moved to begin work at the University of New Mexico and in 2016 began building the first homes in the area. Since the project began in 2004 over 420 students have participated in the scheme.

Here you can see a video of the students in action!

Find out more about the project here.

TECHO offers another youth-led initiative. Working across South America the NGO allows young people to take control of solving housing problems for those in need. The organisation was started by student volunteers in 1997 and since then over 600,000 youth volunteers in 19 countries across Latin America and the Caribbean have been mobilised, with the aim of eradicating poverty across South America. They have managed to build over 100,000 transitional homes in this period.

Young volunteers including architects, engineers and lawyers work in the informal settlements to improve living conditions as well as help people to take control of their own housing solutions. Individual volunteers work with families on a daily basis to create new communities and links between them which would not have existed otherwise.

One volunteer states that “I am not working as a volunteer, I am visiting my friends, we are working together.” This demonstrates the idea of equal participation and shared learning for all in the project. It also breaks the norm that those with most experience are leaders, allowing young people to gain experience and become leaders at the same time.

Find out more about the project here.

For me these two projects demonstrate we can think differently about how we involve young people in our housing futures. Not only can we think about how they can help themselves out of housing need (as shown in my previous blogs), we can also think about how they can come together and mobilise others to access affordable and good housing. There is no reason why young people should not be considered part of housing solutions. ecoMOD demonstrates that alternative forms of housing (in this case prefab environmental homes) can work as affordable housing. TECHO shows housing improvements are not always about new buildings but can be about helping people to assert their rights. This diversity of housing improvements are essential to highlight and something that is seen across our World Habitat Awards winners and finalists. I am passionate about continuing to highlight how youth can have power in housing provision and would love to hear about further projects where youth are taking control. Contact me at Kathryn.Sutter [ at ] www.world-habitat.org if you have any ideas to share.