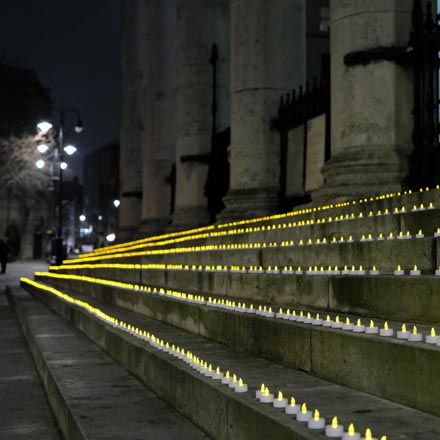 Miranda Keast is Project Co-ordinator for the Dying Homeless Project at Museum of Homelessness – a community driven social justice museum in the UK, created and run by people with direct experience of homelessness.

Death can be hard to talk about, but here at the Museum of Homelessness (MoH), we believe we need to do just that.

I’ve been working for the last six months on the Dying Homeless Project, run by MoH. It remembers people who have died while homeless with love and dignity, and to provide a space and network for us to support each other in grief and to campaign for change to prevent future unnecessary deaths.

In the museum’s earliest days, this was a subject that came up regularly. In group discussions when planning what MoH could be, people said: “We need a space where I can grieve for and remember people I’ve known and lost.” MoH doesn’t have its own physical space yet – we were setup in 2015 and are based in London, where space can be hard to come by. But whilst we look for one, our memorial page can fill a gap and provide this much needed space. Here, we remember all the people who have died and, wherever we can, we publish personal memorials to them. Our work seeks to remember that each statistic was a fellow human being, with a full life and people who loved them.

In addition, through the Dying Homeless Project, MoH researches the deaths of people who are homeless in the UK and uses the findings to campaign for change. We have just released our findings for 2020: we recorded 976 deaths across England, Scotland, Wales, and Northern Ireland – a 37% increase in the numbers reported in our 2019 study. The data was gathered through over 300 Freedom of Information Requests, local news sources, and a national network of organisations that contributed to the project. The figures include the deaths of people who were living on the streets, sofa surfing, and in emergency or temporary accommodation for people who are homeless. You can find all of these names, many unknown, on our memorial site.

When we released our findings publicly, we placed 976 candles in Trafalgar Square in London, in memory of the people who died last year. It was beautiful, and it was tough. This project makes me sad, and it makes me angry. It makes me remember my own losses, and it’s made me cry for other people’s losses. More widely, the findings are a stark reminder that whilst people were brought into emergency shelter during the pandemic, many people still lost their lives whilst staying in these places. We came together to place the candles because we focus on supporting each other, and on creating change, even though it’s hard.

In the last few months, we developed the project by bringing together people from across the UK to form the Dying Homeless Project campaigning coalition. It includes people affected by homelessness, experts in homelessness healthcare, homelessness charities, grassroots activists, academics, journalists, artists and campaigners. After years of rising numbers of people dying whilst homeless, the coalition is calling for a National Confidential Enquiry into homeless deaths. In the UK, a confidential enquiry is an official process used to investigate an area of practice and make national recommendations to prevent future deaths. We hope that this will focus attention on making critical changes to save lives.

The Dying Homeless Project is also about supporting each other. We know how tough it is when someone dies, and we’ve heard people telling us that they need a space to come together and talk about death. To that end, we have also set up an ongoing series of Dying Homeless Death Cafe events, to provide a space for us all to confidentially explore death and loss and remember people we have lost.

The first one that we held in January 2021 was powerful. I was nervous, unsure of what people would bring, and how we could hold such an emotive space, particularly as it was all online. The group that attended brought all sorts of different experiences and reflections, from different places – including one attendee all the way from the US. For me, it felt really special to be able to discuss our feelings and thoughts about such a big topic together so openly. We’re planning to hold the Death Cafe again, and we’d welcome anyone who wants to join.

There are many other things we’re talking about and thinking about too, including a publication of guidance to help support each other around death. There is so much to gain from allowing ourselves to grieve, as well as from saying together ‘enough is enough’, and channelling energy into change.

For now though, we are just taking some time to remember the 976 people who died in the UK last year.