Home / News / Our Blog / A welcome mat, a front door key and a stable address

A welcome mat, a front door key and a stable address 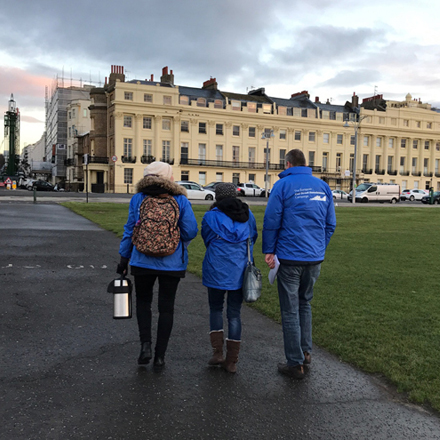 Over 100 people came together in Brighton on Tuesday 27 March in an inspirational event organised by Galvanise Brighton and Hove (GalvaniseBH). As part of the European End Street Homelessness Campaign, the event was an opportunity for the community to discuss how to find a home for everyone sleeping on the streets in their city.

Brighton and Hove have the second highest number of people sleeping on the streets in England and the number is increasing. The terrible weather of the last few months has seen communities across the UK working together to provide emergency shelter for homeless people, saving many lives.  In Brighton they are building on this type of direct community action and are mobilising the community to get people off the streets and into homes permanently.

At the end of 2017, over 180 people volunteered to take part in a Connections Week. Working through the night they interviewed people who were sleeping on the streets about their lives and what they needed.

The results of these interviews have been pulled together in a summary report launched at the event. It provides a stark reminder of the challenges ahead and the desperate need for GalvaniseBH and the people of Brighton and Hove to work together.

When asked what they were hoping for in the future, one person said, ‘A welcome mat, a front door key, a stable address’.

After hearing the results of the survey, over 100 volunteers formed into working groups to start looking at possible solutions to start making a difference as soon as possible. These included assessment centres with emergency short-term accommodation, rolling out Housing First, “Living Rent” accommodation, utilising empty homes, modular housing and community-led housing. Determined to give a voice to people with experience of homelessness, GalvaniseBH are looking for ways to meaningfully co-produce solutions and will now set up a number of Ambition and Development Groups to continue doing this.

A more detailed report is due later in the year but GalvaniseBH is determined to keep making progress on their goal to ensure no-one is sleeping rough in Brighton by 2020. Based on their work so far they are a step closer to finding homes for people that are so desperately needed.