Home / News / Our Blog / Until the tremor has passed 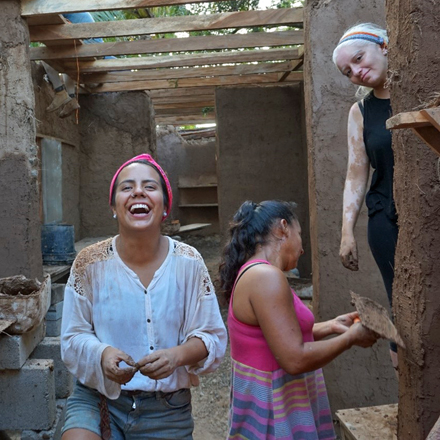 Pierre Arnold, Programme Manager for the World Habitat Awards, blogs about the inspirational reconstruction process in Santiago Niltepec, Oaxaca, Mexico, which won a Bronze Award in 2021 for Programa VACA.

Imagine getting to bed after a tiring day. It’s almost midnight, and everybody is already sleeping when, suddenly, your house starts shaking and the tiles start falling from the roof while the din outside is getting louder and louder.

Creaking beams, breaking wood and glass, falling objects, children crying, people running and shouting, dogs barking … You’re on your feet but the earth is moving, the children are already running out the door and you rush to help your old parents out of their bed before the roof collapses.

In a few hours you will have all the technical details, the strongest earthquake in Mexico since 1932 just happened in the Tehuantepec Gulf; the epicentre is less than 50km under the Pacific Ocean and less than 200km away from your area where intensities were between IX and X; Magnitude 8.2.

People have felt it from Mexico City to Honduras…

In a few days you will hear that over 100 people died and almost 60,000 homes have been damaged – 5,500 are destroyed, especially in the States of Oaxaca and Chiapas. But for now, what matters is to gather the members of your family in a safe place… rescue people who are still stuck in their houses before the aftershocks… find who is missing… take a quick look around at what is left from your house, your village, and every material and immaterial thing that was your present and, in a glimpse, became your past…

In this moment, what can you expect your president, your governor, your community or the rest of the world to do? How are you going to reconstruct your life?

The Mexican government activated the disaster emergency fund Fondo de Desastres Naturales (FONDEN) and could access additional international resources through the World Bank Catastrophe bonds (CAT bonds) it has subscribed to. The FONDEN pays for the early response and recovery activities, including public infrastructure and housing reconstruction. A few weeks after the earthquake, national and state governments of the affected areas undertook a survey of the damages to housing.

Low-income families who could demonstrate the legal possession of their plot of land could receive either $120,000 MXN (6000 USD), $15,000 MXN (750 USD) or nothing, from the FONDEN, depending on whether, according to the surveyor, their home had ‘total damage’, ‘partial damage’, or nothing serious enough to receive compensation.

These payments were distributed to families in the form of debit cards; one to buy construction materials in a selected number of authorised dealers, and another one for cash withdrawal to pay masons or other workers. A technical assistance would be offered with no cost for beneficiaries by authorised NGOs and private companies which were already working with the National Commission for Housing (CONAVI) in social production of housing or rural housing programmes before the earthquake.

Unfortunately, this process was incomplete and led to several problems in the affected regions. Some communities were left out of the census or were wrongly assessed and therefore left without compensation for their loss. In a context of dramatic price increases of construction materials, the subsidy amounts were far too low to adequately repair or rebuild a damaged house, especially large traditional ones made of brick – or adobe – and wooden frame with tiles. Moreover, the obligation of using the FONDEN card in authorised dealers excludes local materials like bricks, adobe bricks, tiles, local wood, and favoured the industrialised materials (cement, concrete bricks, steel bars, zinc, or plastic roofs, etc.) which have a high carbon impact and no contribution to the local economy.

Adapting their offer to the maximum subsidy received by affected families ($6000 USD), many private construction companies started selling new turnkey houses, generally around 35-45m², 2.40m high, with kitchen, bathroom and two small bedrooms inside. These tiny houses aren’t adequate for the climate or the cultural habits of the communities. Many people who could’ve repaired their existing home with non-profit technical assistance, followed the recommendations from companies, (and sometimes local governments or neighbours) to destroy their houses to buy these tiny houses. Thousands of traditional constructions could have been saved.

Against the stream: reviving local materials and vernacular architecture after the earthquake

In this context, some organisations showed specific interest in preserving the vernacular architecture of each village and town from being destroyed and replaced by standardised construction or self-reconstructed, or even repaired, without integrating anti-seismic techniques. Several Mexican civil society organisations and universities helped affected communities repair or reconstruct traditional houses – respecting the cultural identities of local people, empowering them in this difficult process of restoring their livelihood and habitat. Some of these organisations are Comunal, Cooperación comunitaria, ITESO university, and Programa Vaca.

Programa Vaca entered the 2021 World Habitat Awards for a reconstruction project of four houses in Santiago Niltepec (in the Tehuantepec region in the state of Oaxaca) directly benefiting 18 people plus the community members and volunteers who participated in this solidary initiative.

VACA’s project was selected as one of the eight finalists for its outstanding work in both the participatory process and the effort to adapt vernacular architecture and local materials to reconstruct adequate housing. With its small staff and the help from volunteers and beneficiaries, VACA demonstrated that it is possible to conceive and construct beautiful houses, with much lower prices per square meters, than private companies. Despite its small scale, VACA’s work in Santiago Niltepec has received a Bronze Award recognising that it highlights the social function of architecture and design. It is not only about reconstructing homes, but also reviving local knowledge and solidarity, promoting gender equality and human dignity, and achieving quality of life.

These elements are crucial to help communities and individuals recover from the trauma of the post-disaster situation, and we hope it can inspire future reconstruction processes.