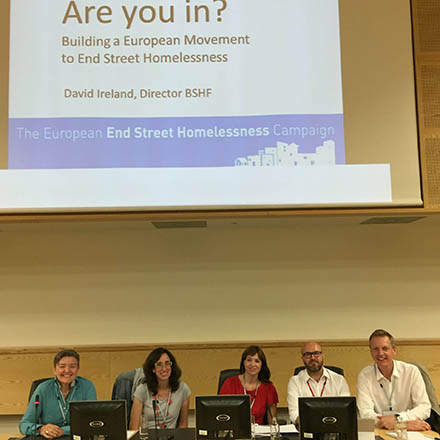 At the 2015 FEANTSA conference in Paris World Habitat raised the idea of a European End Street Homelessness Campaign. This campaign would seek to end street homelessness in participating European cities by 2020. It would borrow the best of the 100,000 Homes Campaign in the USA and adapt it to a European context.  The campaign also took inspiration from the success of the work in Finland, the only country in Europe that has seen a recent reduction in homelessness.

A year later we met again in Brussels for the 2016 FEANTSA conference. Our workshop “European End Street Homelessness Campaign – Are you in?” was the best attended of the conference with 90 delegates from across Europe. Our four speakers were from three of the vanguard cities of the campaign: Valencia, Barcelona and London. They reported back on the incredible progress that they’ve made. The three cities are at different stage of completing a “registry week”. This important first stage of the campaign is an intense activity based on a simple idea: communities should get to know every homeless person by name by going onto the streets to find them and assess their needs and vulnerability.

The cities recruited and trained hundreds of volunteers who combed the streets of their city to find and ask as many people sleeping rough as possible to complete the vulnerability index questionnaire. The questionnaire is a rigorously tested set of in-depth questions that seek to provide detailed information about people’s needs. The same questionnaire is used in each city (translated into the relevant language and with small changes to reflect local circumstances). The process occurs during the night to ensure that those surveyed are street homeless, meeting FEANTSA’s definition of “roofless.”

In April Rais Fundación carried out a registry week in Valencia. Luis Perea and Begoña Pastor described how “Homeless Meetup” in Valencia (as it was called) mobilised over 400 volunteers to survey homeless people in the city. The results were highly significant. Not only did it reveal a much higher street homeless population than was previously thought, but for the first time it provided detailed information about the make-up of that population and people’s individual needs. The survey was not a count but a way of understanding who the people who live on the streets really are, what their lives are like and how vulnerable they are.

Arrels Fundació arrived at the conference straight from conducting a registry week in Barcelona in June.  Marta Olaria reported that, unlike in Valencia, there was already good information about the numbers of street homeless people in Barcelona, a street count having been conducted earlier in the year. The registry week however, provided far more information and hard evidence about who was living on the street. It gave a new understanding of who the people were. Previously it was assumed that most of the homeless population were Spanish nationals, but this proved to be untrue. The majority of street homeless people were from other European countries or Morocco. Arrels had huge success in communicating their registry weeks to the public through local media. The aim is to create a momentum which drives a response to end street homelessness.

St Mungo’s Broadway is one of a group of homelessness charities that have come together to form Westminster Homeless Action Together to conduct a registry week in central London in July. Petra Salva described how London has a vast number of homeless organisations which have for many years operated in a competitive funding environment. The registry week is the first time for years that many have worked together on a single project. London already has some of the most sophisticated data on homeless people of any city. CHAIN is a database that allows homelessness organisations to share and track information about homeless people. But, Petra explained, it monitors the situation but it doesn’t drive a movement to end homelessness. As one workshop  participant said: “A registry week gives you the permission to be brave and try something new.”

A further registry week is due to take place in the south London borough of Croydon later in the summer.

There were different views about some details. Some cities provide a payment as a ‘thank you’ or an incentive for people to complete the questionnaire, others do not. There were differing views about taking and using photographs of homeless people. But all three cities agreed that the rich data and insight provided by a registry week is the information the city needs to end homelessness.  Engagement with local government and housing providers was essential. The registry week provides the case for action, but the next stage of the campaign is to call for homeless people to be prioritised for housing.

All three cities have found that recruiting local volunteers has a catalytic effect. Hundreds of new people are participating and engaged in the drive to end homelessness. They are part of a new movement in each city that seeks to break the status quo and permanently end homelessness. As one workshop participant put it:  “There’s no certainty, but the current approach isn’t working, so why wouldn’t you try something different that has worked elsewhere?”

1 hour ago ⭐️𝙒𝙀𝙀𝙆𝙀𝙉𝘿 𝙍𝙀𝘼𝘿𝙄𝙉𝙂⭐️ All 10 of our European End Street Homelessness partners met recently for our ‘Annual Gathering… https://t.co/too7p7KRDB