Home / News / Our Blog / Some sunshine in between the clouds: my visit to Trapicheiros in Rio de Janeiro

Some sunshine in between the clouds: my visit to Trapicheiros in Rio de Janeiro 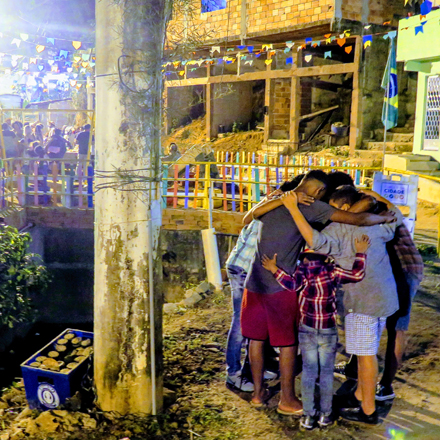 As the process to introduce Community Land Trusts in Brazil reaches its second phase, Mariana Gallo (Programme Lead at World Habitat) reflects on her visit there two years ago as the project was starting.

My visit to Rio de Janeiro in 2019 was not as glamorous as you might imagine – constant rain and a political tension that could be felt almost anywhere created a pessimistic picture of the famous ‘Cidade Maravilhosa’ (marvellous city). However, I was lucky to have an opportunity to bring some positive light to the visit. I visited Trapicheiros, a small informal settlement where our partner Catalytic Communities is working with residents to implement a Community Land Trust, inspired by World Habitat Award winners Caño Martín Peña in Puerto Rico. The initiative aims to regularise the land situation of residents, providing an affordable alternative that will stop them from living in constant fear of eviction.

I remember visiting Trapicheiros on a rainy Wednesday evening. The taxi there took one and a half hours due to traffic and a football game in the nearby stadium. This gave me the opportunity to discuss extensively with the driver the political scenario at the time, the uncertainties that vulnerable people faced and the tension everywhere.  When we reached our destination, I found myself in what felt like a quiet, peaceful, and friendly neighbourhood. There was lots of nature around and I was warmly welcomed by the residents, with homemade food and a lot of enthusiasm in sharing their story and plans for the future.

Trapicheiros is a small low-income community of around 50 families, immersed in a middle-income and upper-middle class area of the city. They have been there for several generations, and the area around it has boomed since, which led to tensions with some of the new neighbours. In particular, some residents from a recently-built condominium next door were unhappy with Trapicheiros being there, accusing them of ‘visual pollution’ as the informally built houses can be seen from the luxury recreational area and swimming pool. Aggressive tactics have been used to try to get them out of the area. These included sending drones to take photos of them, putting construction materials on the road to pretend they were building without permission, calling them ‘invaders’, and accusing them of deforestation (actually, the preservation of nature is one of the key priorities of the community). As a result of this harassment, and because of their irregular situation, Trapicheiros’ residents live under constant threat of eviction.

Trapicheiros started as a group of tenants of a private landlord, who owned the land and the houses, in early 1900. Eventually the landlord disappeared, and nobody else has claimed the land since. The residents have rebuilt the houses, but their land titles are still pending. They have all the requisites and are currently awaiting judicial recognition. The plan is that the legal tenure of the land and the legal recognition of the Community Land Trust will happen at the same time, thus avoiding the undesired effects of land regularisation in such context: gentrification, speculation, and further insecurity for residents.

The disputes with neighbours led to a defence attorney getting involved to protect the families. They were advised to face these challenges as a group, and so an ‘Associaçao de Moradores’ (Residents’ Association) was created, with democratically elected representatives. The Association members I met were active, engaged and enthusiastic. Like many of Rio’s favelas, the community has incredible views over the hills, and a special connection to nature – fruit trees and animals are abundant. The enthusiasm and positivity of residents makes Trapicheiros a place of hope in a generally pessimistic scenario.

Through Catalytic Communities, the president of the Residents’ Association in Trapicheiros had the opportunity to visit the Caño. I was amazed at how much residents knew about the Puerto Rico situation, and how that connection has been instrumental in getting residents on board, with people saying that the Caño case ‘helped me realised that it [the CLT] actually exists, it’s not just something we’ve heard of’ and ‘if it worked there, it can work here’. In particular, we discussed the importance of involving young people in the process to ensure its long-term sustainability, and the slow but firm process that is required – which also helps create a stronger community.

The Residents’ Association and Catalytic Communities have worked together to get residents’ views on what they would like in their community in the years to come. In addition to the land formalisation, other improvements include better sanitation, water, access road, waste collection, and to have a physical space for the association to operate and meet.

I remember my visit vividly and fondly.  The taxi ride back home didn’t take so long – rush hour had passed, and the game was over. The local team had secured a victory, so the driver was happy, and so was I: I left Trapicheiros feeling hopeful and relieved. For good reason, there has been so much progress made in the last two years, even with the enormous challenge of COVID-19 that has devastated communities across Brazil. Now there is hope of making Community Land Trusts a reality, not just in Rio’s favelas, but all over the country, through a national CLT Coalition. And over 500 community leaders, organisations and residents are attending a national seminar this week.

I feel the same hope now as I felt then. In the midst of this tense situation, some people are dreaming of, and working together for, a more hopeful future for themselves and their future generations.