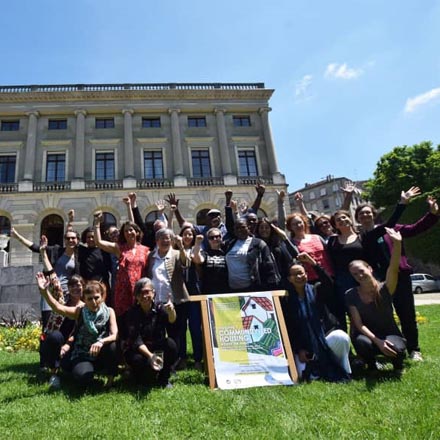 Some rooms just feel like they’re filled with so much inspiration, knowledge and passion. We were very lucky to be sitting in exactly one of those places recently.

In June, World Habitat was amongst a dozen organisations – meeting in Geneva – who have radically transformed the lives of communities across the world. These included SDI, who have achieved so much in settlement upgrading, data collection and negotiations with local authorities across the African continent and beyond. And the Asian Coalition for Housing Rights, whose citywide approach has united communities and means they now have a stronger voice in urban transformations. It was, once again, inspirational to hear about Grounded Solutions Network’s impressive capacity to provide support to new community land trusts around the USA. And from FUCVAM and FUNDASAL, and their extensive efforts to spread mutual aid cooperatives across Latin America.

We came together to make progress on our dynamic partnership work – as the Social Production of Habitat Platform – to ensure community-led housing is seen as a solution to many of the housing issues faced – in particular – by low income people across the world.

The Platform is co-ordinated by the Swiss organisation urbaMonde, and their Program Co-ordinator, Bea Varnai, explains that:

“The Platform for the Social Production of Habitat is a unique space for exchange, peer learning and coordination for umbrella organisations that are building more inclusive cities through innovative and disruptive practices and models. The idea for such a Platform was born in 2014, and we are now excited to see it growing into an operational tool for scaling up community-led housing.”

This meeting followed previous work to set up the building blocks of the Platform which is organised in regional hubs in Latin America, Europe and North America. New hubs will be starting in Africa and Asia within the next year, and all of them are organised in collaboration with local partners. 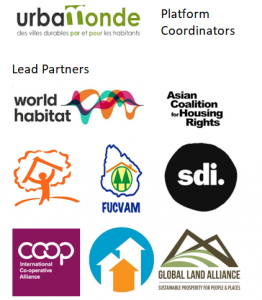 All partners meet once a year at this Geneva meeting, to develop our shared agenda that includes:

This year we were also joined by recently formed groups, such as the Center for CLT Innovation – which supports international peer-to-peer expansion of community land trusts, and Rakoczi Kollektiva who attended on behalf of MOBA Housing – an emerging network of pioneering housing cooperatives in Central and South-Eastern Europe. Other organisations, such as funders and academic actors, also contributed with their expertise.

The Solidarity Fund for Habitat, which provides peer-to-peer affordable finance between community-led housing groups, was launched at the meeting, alongside the announcement of a new Digital Platform which will document and connect groups worldwide. (This will be available soon – current version here).  There was also a public event at Palais Eynard which demonstrated the work of the platform and its partners.

It’s vital that community-led housing is available globally to address pressing issues – and this Platform is a great avenue to connect those housing efforts worldwide. We’ve been active in the Platform since 2015 – with an advisory role in its strategic shaping; participating in the selection of the Social Production of Habitat Awards and connecting these winners with our own longstanding World Habitat Awards winners; raising visibility and; contributing both financially and through our participation in hubs and meetings. And we look forward to many more years promoting and developing this urgent agenda.

By injecting new vitality, stability and hope through grassroots action, this could mean new cooperatives are created in informal settlements, or more community land trusts in run-down neighbourhoods. At World Habitat, we are proud to be part of this commitment, and of the continued work with urbaMonde and the Platform’s key partners. The work continues, and it is great to be working with some of the most inspiring people and organisations that can help us achieve this.