More than a simple stove: transforming lives in rural Pakistan 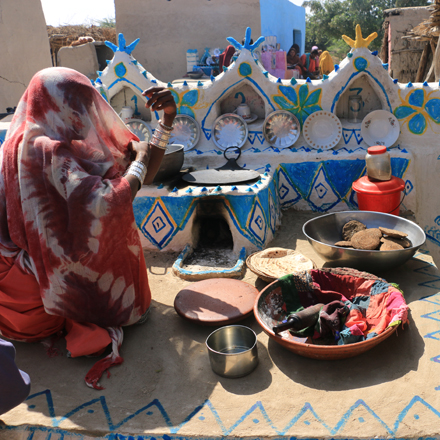 Walking into a village in rural Sindh, southern Pakistan, for the first time, I’m instantly struck by the contrasting colours. Vibrant reds, greens and pinks sit brilliantly on the dusty, barren landscape behind. The acidic soil here makes crop-growing difficult, and this year’s drought has made it even more arid.

But in front of this, golden sequins glint from saris, making the women sparkle in the heavy midday sun. We’re greeted by the entire village. Men, women and children guide us to the first Chulah, a smokeless stove where a woman sits upright on an elevated platform, beautifully decorated with majestic peacocks and bright blue and yellow flowers.

She has two pots on the go, one flat black slate for cooking round, soft chapatis and another with bubbling hot oil, from which she strains spicy vegetable pakoras. It’s Diwali so everyone is cooking and every single woman we meet invites us to try something she has prepared.

Meeting these women, it quickly became clear how much the stoves have impacted their lives. They speak to me about the benefits that they’ve brought about – fewer accidents caused by children falling into the open flame cookers on the ground, improved health due to less smoke inhalation and food contamination, and a better income because the double cooker lets them cook enough food to sell some of it. But far more telling is their confident tone of voice and smiling eyes, which emanate a sense of exuberance.

The Pakistan Chulah, first invented and brought to the area by Heritage Foundation Pakistan, is one of two winners of the 2018 World Habitat Awards. The real beauty of this project is that it’s driven by the people it impacts most, promoting both female empowerment and solidarity. I met one woman, Champa, who has become a true entrepreneur, spearheading the training of 30,000 more people in Chulah construction. Countless women recited Champa’s name when I asked how they had learned about the smokeless stoves. Another had begun to build and sell the mud bricks used for construction, whilst every single woman had started to make her own energy-efficient fuel out of dung and sawdust.

The Chulahs have become much more than cookers. They are an opportunity in a society where rural women face myriad disadvantages. As they begin to earn money, some women have learned to sign their names to open bank accounts. An act as simple as signing is a huge achievement for women, who’ve never had the chance to go to school and were never given the opportunity to learn to read and write.

In the villages, women and children sit on the Chulah’s large flat platform, transforming it into a social area, for laughing and sharing experiences. Each woman has her own stove, which she has built and decorated herself, encouraging ownership, creativity and Individuality. Ultimately, the Chulah offers the opportunity for women to own a space and exercise their agency within and beyond it, with both dignity and pride.

Since Heritage Foundation initially trained 35 women in the art of stove construction, the project has spread both magnificently and organically. Chulahs can now be found in 150 villages across the region, benefitting over 100,000 people.

But while it’s been undeniably successful, four out of five Pakistanis still live in rural areas, where they struggle to meet their daily needs. Half of rural Sindh’s population lives in poverty, and that doesn’t just mean they don’t have enough money. The public sector provides virtually no piped water or sanitation, illiteracy rates are high, and children can’t attend school.  In addition, there’s no access to medical care or electricity, and public transport or paved roads are nowhere to be seen.

It’s in this context that the Chulah – something as simple as a stove – has become so vital. The potential to cook extra poppadums on the big stoves means that women can make a small living from food sales. With the help of Heritage Foundation, they have been able to save enough to build toilets and water pumps in their villages. And gradually, these become the very things that help people improve their lives and lift themselves out of poverty. Having already impacted so many people in rural Pakistan, it’s clear that the Chulah project holds huge potential to be scaled up and lead thousands more families out of poverty.

12 hours ago 👨‍👨‍👧‍👦Multiple generations of families are living in dilapidated homes & with decades of underfunding, the supply… https://t.co/jhGkohDT3A