Life and death on the streets of Alicante 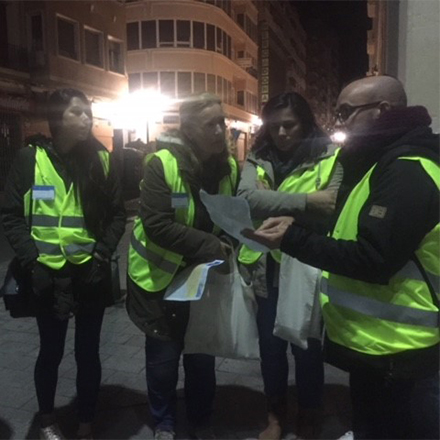 Alicante has joined the European End Street Homelessness Campaign. Over 2 nights during November 150 volunteers convened from all over Alicante, working together to walk the streets, the squares, the parks and the harbour to interview the people whose only home is the street. The volunteers got to understand more about people’s individual journeys and gain a real understanding of their lives. Lyndall Stein, who works on the campaign offering support with campaigning, shares her perspective:

Set amidst the glories of the Mediterranean, Alicante has blue skies and sparkling sea. This city has a troubled past; it now hosts millionaires with glistening yachts in the marina and holidaymakers strolling on the elegant sweep of its famous mosaic promenade. But hidden away in dark corners, there are so many homeless people, whose only bed is a doorway, a bench, a pavement or the ground under a hedge or a tree.

The local government is part of a progressive coalition including Carmel (Head of the Social Services). She is really determined to find new ways to understand and end the human pain of homelessness.

RAIS Fundación had been asked by Alicante’s local government to help develop a Connections Week which is part of the work involved in the European End Street Homelessness Campaign. I joined in with their Connections Week which they had called ‘Homeless Meet Up Alicante’. I met with Luis Perea and Alfonso Hernandez from RAIS Fundación, who were sharing their experience and expertise with the local partners and organisations working on the ground in Alicante.

They were also sharing this first night of the campaign with Dan and Renate who had travelled from Amsterdam. Dan and Renate work on a Housing First programme called Discus and wanted to understand more about the work of RAIS Fundación and the overall campaign. This shows the strength, positivity and determination of cities across Europe wanting to learn from each other and work together to end homelessness.

The ‘Homeless Meet Up Alicante’ enabled conversations to understand the dark and painful journey people experiencing street homelessness have travelled. Plus, it builds a true picture of the human cost, the right solutions and why a decent home is the right and proper solution for every person who has to make their bed on the unforgiving streets. 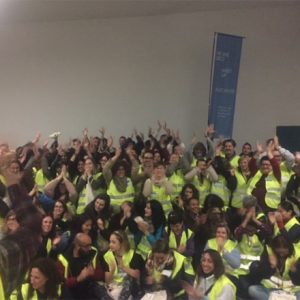 Each person has a unique story, each person has a different and often complex journey, behind each story are common themes which helps us understand why the problem of homelessness is escalating across Europe. Common themes are inadequate housing, inadequate access to resources, limited social and financial support when people lose their jobs and the underfunding of social and medical care that would help to prevent people ending up with a one-way journey to the street. It is also a story of the corrosive effects of inequality and political decisions that do not recognise the basic morality of protecting the poorest and most vulnerable in our society, the critical importance of our common humanity.

Prevention is better and cheaper than any ‘cure’, the right measures at the right time can help people, but the destructive impact of sleeping on the street will increase vulnerability so rapidly. The damage done will have a higher human cost and a greater cost to society to remedy. 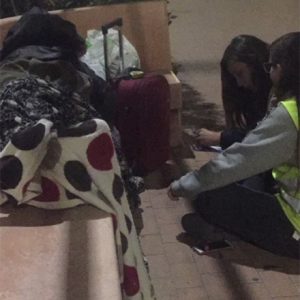 Ana, a young woman who was volunteering, crouched down over a stone bench by the marina, its purpose to provide a charming vista of the bay and the glamourous jet setters yachts. There was nothing glamourous about its use of a bed as a last resort by Enrique. He explained to Ana why he was sleeping on that cold hard bench. He was from Valencia but his shame at the loss of his job as a painter and decorator and then his home had driven him from friends and family, and his tortuous descent had begun. He was 68 and told Anna he had lost hope and was just waiting to die.

I thought of Enrique as I lay in my hotel bed after our long night walking the streets talking to the people who have to live there. How can it be that an old man who should be living a peaceful retirement in a place he can call home is actually sleeping on a stone bench? No walls to protect him from the chill wind, no place to make a cup of coffee, no sink to wash his face, no pillow to rest his head, no chair, no table, no place to hang his clothes, no door to close. Only a thin blanket, a small bag and cold stone to lie on. His old bones unprotected and so alone. With the view of the millions squandered on so many luxury yachts.

That night one homeless man’s journey ended tragically. He was 75 years old, sleeping in the park, in the playground we had visited. He was found dead in the morning.

This doesn’t have to be the reality for those sleeping on the street. The campaign wants to do things differently to stop managing homelessness and start ending it. Partners in Alicante will now be working to see how they can make systematic change to help those off the streets for good. Follow @WorldHabitat and #endstreethomelessness for updates.

18 hours ago 🏘️Are you interested in working directly with frontline & campaign organisations as well as stakeholders like UN-Ha… https://t.co/hv7KkDCpt8