Home / News / Our Blog / ‘It is our fight, but it is a common fight too’ – World Habitat showcases best practice on the world stage

‘It is our fight, but it is a common fight too’ – World Habitat showcases best practice on the world stage 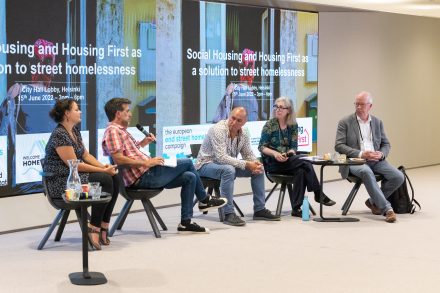 “It is our fight, but it is a common fight too” was a key message from Vera Kovács, co-leader of Utcáról Lakásba! Egyesület / From Streets to Homes Association in Budapest, in reference to the importance of sharing best practice and working in partnership at both a local and international level in the fight to end street homelessness. Vera was speaking at an event organized by World Habitat, alongside partners the Housing First Europe Hub, as part of the 2022 International Social Housing Festival in Helsinki.

The event, attended by over eighty people in person and more watching remotely, featured speakers from organisations working in Helsinki, Budapest, Lisbon, and Lyon and explored best practice around the use of social housing and Housing First as a way of ending Street Homelessness.

Panelists shared their experiences of implementing Housing First in different contexts, with varying levels of political support, housing supply, available funding, and local housing policies. Central to the success of all the organisations presenting were the crucial roles of housing supply, partnerships, and evidence.

Evidence shows Housing First works, but it relies on a sustainable stream of affordable social housing. As Juha Kaakinen, former Chief Executive of the Y-Foundation, put it:

”You can’t have Housing First without housing first”

As a social housing provider and the fourth largest landlord in Finland, the Y-Foundation has played a leading role in a policy that is on target to end long term homelessness. The Y-Foundation was also a Gold Winner of the World Habitat Awards in 2014 and its work and progress was a key driver and inspiration behind World Habitat’s European End Street Homelessness Campaign. The Campaign, now in its sixth year, comprises a network of ten inspirational city partners, all working to end street homelessness in their communities.

Finland is one of the only countries in Europe where homelessness is decreasing, and this is largely thanks to the Foundation remaining focused on its core objective and continued to provide affordable and permanent homes for those experiencing homelessness. Finland also has national commitment and a legacy of housing policies championing Housing First.

Many countries across Europe, however, are working within quite different contexts, without national support or long-term funding opportunities. One such country is Hungary, and Vera gave an overview of From Huts to Homes, their housing programme inspired by Housing First principles for which From Streets to Homes were awarded a Bronze World Habitat Award in 2020.

Without any social housing in Budapest, from Streets to Homes renovate empty municipal and privately owned houses with the help of volunteers and future tenants. The programme, which has been operating for over 10 years and has provided homes for over 90 people, turns vacant buildings into permanent affordable rental homes, and provides ongoing person-centred support to tenants for as long as it is needed. It is not, Vera says, what social workers are trained to do, but is a way of finding housing for people who would have remained homeless, some of which had been homeless for over 20 years.

From Streets to Homes are working to end homelessness in Hungary within a particularly challenging context, where homelessness is criminalised, there is insufficient affordable housing, and where there is no national policy to address homelessness and housing exclusion.

They also aim to continue providing data and evidence to fuel their advocacy work and prove that Housing first can and does work in the Hungarian context and are working with a network of NGOs and municipalities to develop a Hungarian social housing policy.

The importance of collecting data and evidence to share with political decision makers was also touched on by Américo Nave, Director of NGO CRESCER, operating in Lisbon, Portugal who shared evidence and lessons learned from their 9 years running É Uma Casa (Lisboa Housing First).

CRESCER, who are a member of the European End Street Homelessness Campaign, have recently published a booklet sharing this evidence and impact and recognize the value of having research and evidence that Housing First works to influence policy makers and partners. Speaking at the event in Helsinki Américo said:

Américo also referenced the need to include lived experience in research and evidence, recognising that:

“People with lived experience are the best partners to find effective solutions and should be listened and enrolled in these teams as peers… Let the tenants give their testimony in public contexts, which can influence the growth of the project”

Américo’s view was echoed by Etienne Fabris from Est Métropole Habitat, who also talked about the crucial work of cross-sector partnerships. Est Métropole Habitat are a key member of GIE (La ville autrement), a network of social housing providers and NGOs working to tackle homelessness through the provision of Housing First.

The goal of the GIE is to work in together to develop programmes which increase the amount of permanent affordable housing for people experiencing homelessness. These plans include mobilizing the private sector, building new properties and semi-shared housing options for people struggling with loneliness. Their innovative approach also includes the development of modular housing and capitalizing on opportunities from town planning and development by exploring the use of semi-temporary stock to provide Housing First tenancies.

Etienne recognizes that some of these programmes deviate from the traditional Housing First model to include permanent scattered housing but advocated flexibility in delivering the model. This was a sentiment shared by all panelists, including Juha, who noted that it was difficult to upscale Housing First without flexibility in how the model is delivered.

Linked to this was the question of who Housing First programmes are for, and how to include migrants experiencing homelessness, a group so often marginalized by restrictive social housing policy or stigma. As Etienne noted –

“It would be a mistake to think that social housing policy isn’t for migrants. Nowadays, most of the cost in temporary accommodation are linked to migrants, (this accommodation) costs a lot of money, not adapted for families, we should find solutions to develop the Housing First approach for this population as well”

Both Américo and Vera agreed, confirming that their Housing First services were accessible to all people experiencing homelessness but recognised there were structural and administrative challenges to overcome.

For more information on the European End Street Homelessness Campaign, you can sign up to our newsletter here and find out lots more info on our partners here.

You can watch a full recording of the event and panel discussion here.

15 hours ago ⭐️𝙒𝙀𝙀𝙆𝙀𝙉𝘿 𝙍𝙀𝘼𝘿𝙄𝙉𝙂⭐️ At World Habitat we agree and design a variety of support packages to help our Gold Award winn… https://t.co/KCv6KLdj7h