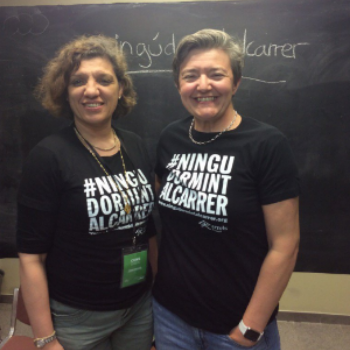 My starting point is this. I believe rough sleeping is harmful. It’s bad for the people rough sleeping, for their health, for their mental well-being, dignity and respect. People sleeping rough are in a situation which can spiral out of control and it leads to premature death. The average age of death of someone in the UK who’s been homeless is 47. I have seen first-hand the damage it does to individuals, their families , friends and to communities and it’s just not ok to walk on by and do nothing about it.

Local communities are impacted because people sleeping rough have to survive on the pavement in the locality in makeshift conditions which might end up causing problems for others living or working in the area.

Rough sleeping is a very visible and acute sign of poverty and local communities where this is happening a lot can be left feeling that people are being forgotten, or marginalised, and communities then struggle with what to do and how to help, individually and collectively.

A person sleeping rough in your local street should make you question what can you or should you do about it. I often get asked: should I buy food for the person? Give them money, give a sleeping bag, take them into a spare room, pay for a backpackers’ hostel for the night, tell anyone or ring an ambulance if they’re looking really unwell?  Ring the council, or try to put them in contact with a local homelessness service?

Sometimes my answers to these questions leave people feeling grateful, sometimes frustrated and more often people are still left feeling that there must be more they can do to help. That’s why I am urging people to get involved in Westminster Homeless Action Together.

The reality is that numbers on the streets are rising despite the enormous efforts of homelessness charities that are helping, and have been for years. St Mungo’s, The Connection at St Martin’s, The Passage, West London Mission, the Abbey Community Centre are just some of those in Westminster providing support for people sleeping rough. We’ve achieved a great deal and helped a lot of people but we need to do more and it’s time to take a fresh look at how best to help.

The landscape of rough sleeping is changing. While homelessness services and council housing services are facing cuts, people are ending up on the streets who may have been able to find a home and a place in previous years.

Relationship breakdowns, poor mental health, poor physical health and other ‘traditional’ reasons why people told us they ended up calling the pavement a home are also now mixing alongside the stories of those destitute as refugees, people who’ve been trafficked, people who came as migrants to England’s big cities and who are working but can’t find housing, or afford rents.

That’s why urgent and different action is now needed. By the whole community and not just from the usual suspects. And that’s why I’m really committed and energised to be involved in Westminster Homeless Action Together this July when we want the whole community to be involved in working together, finding out more about those rough sleeping on their doorsteps and helping to suggest ways we can help them move off the streets.

We want the community to bring a different perspective and work with us. We must be ambitious. We want your help to pilot an approach which will come up with a new road map for achieving the ambition of ending rough sleeping.

I want some of you already aware of the issues to be involved. But I also want those of you who’ve perhaps thought people sleeping rough are ‘someone else’s problem’ to get involved. On any one night in Westminster around 300 people are sleeping rough which means we have to redouble our efforts now. Tomorrow is too late!

We need more conversations between those people who are sleeping rough about what they want to happen, and Westminster volunteers who want to make it happen.

We need to galvanise your energy, compassion, empathy and goodwill of which I know there are tons, so we can actually make a significant difference to the lives of some of the most vulnerable people – and we need to do it together.

Petra Salva is Director of Street Homelessness and Outreach services at St Mungo’s.