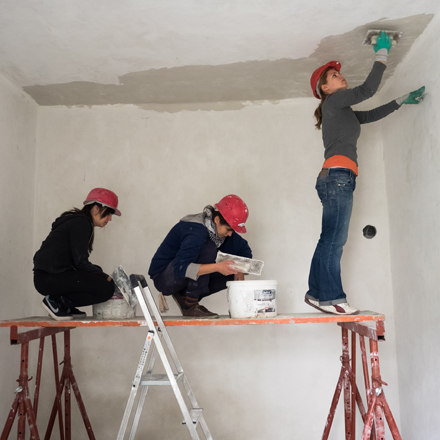 In June, Budapest became the latest city to join our European End Street Homelessness Campaign, led by the organisation Utcáról Lakásba! Egyesület / From Streets to Homes Association. In this blog, originally written for The Big Issue, they explain the challenges they face working in a ‘dysfunctional system’ that criminalises street homelessness, and how – despite this – they support homeless people and illustrate how a functional system could work.

Hungary is in a dire need of change when it comes to its housing policies.

From housing poverty to homelessness, there are a lot of improvements that need to be made before you can even begin to solve the homeless rates of Hungary.

The amount of money you need to keep a roof over your head in this country has skyrocketed in recent years. Many people are in danger of losing their home and many already have.

After the socialist rule came to an end in 1989, the local authorities began to sell the houses they owned, only the ones in the worst conditions were kept and consequently today only 2 to 3 per cent of all dwellings are owned by local governments. That is less than 100,000 properties, most of which are in the capital. Unfortunately, this means that homelessness is an almost certain outcome for many.

Once you are on the street without a registered address you end up trapped within the homeless system of Hungary, a system which can only be described as dysfunctional.

The system is made up of three supposed steps, you move from a place to spend the night to a homeless shelter before then hopefully finding a stable home.

There are night-shelters where people can sleep, but cannot stay during the day. There are shelters for the daytime, where people cannot sleep. The second stage shelters provide a longer, but ultimately still temporary place to stay. None of these, however, truly help, since the system does not plan for how these people are supposed to find a permanent residence. While they do have the help of social workers, the workers are limited with the options they have.

As previously mentioned, the housing market prices are outrageously high at the moment. For people aiming to find a way out of homelessness, these prices are often completely out of reach. As such, many turn to the dwellings owned by the government that are less than half the market prices. However, the poor conditions and the lack of availability are not the only issues people face when aiming for this option.

Most of the government-owned dwellings are in the capital, but they are unevenly rationed between districts. Moreover, each district’s government has different rules regarding eligibility so your chances of being considered vary depending on where you are. A huge issue is the fact that often eligibility is limited to those who already have a registered address, so homeless people are quite simply sidelined from the start.

The number of these dwellings keeps diminishing when, with our homelessness statistics, it should be increasing.

While we do have programmes to support families, like monetary assistance to buy or renovate their homes, they are mostly limited to people who already own homes or to those with stable incomes. There is no safety net for families facing eviction and if they are forced to leave their home their children are often taken from them. Middle and upper middle-class families rarely have to worry about such matters, yet these assistance programmes seem to be aimed towards them. Families with children get tax benefits, and the higher your income the higher the tax benefit is.

So, while those who live comfortably benefit from extra help, those who are forced out of their homes and end up living on the street are seen as criminals by the government. A bill passed in 2018 has criminalized living in public spaces and those who are caught doing so may even face imprisonment. This is the work of a government that tries to hide its homeless population, rather than helping them. In such a system, homeless people are forced to hide from the authorities, which only makes it harder for social workers to help them.

Our organization, From Streets to Homes Association, is a non-profit organization. We operate by a Housing First principle, we believe that in order for people to start a new life, the first step is a stable roof over their heads.

We have programmes aimed at providing housing for people living in housing poverty or homelessness. We renovate municipally owned empty apartments to enable people to move in with affordable rent prices.

We also operate a housing agency from private house owners’ apartments. We have a further programme that connects employers and potential employees, since finding a reliable job that is not exploitative can be hard nowadays.

All of us at From Streets to Homes Association are dedicated to managing and expanding these programmes in order to show the way for a systemic change of housing policies in Hungary.

This article was originally published by The Big Issue and is republished here with kind permission.

2 days ago 🎇I'm sure everyone will join us today in congratulating our partner @CatComm who this weekend were presented with t… https://t.co/BWSTaBCxSw