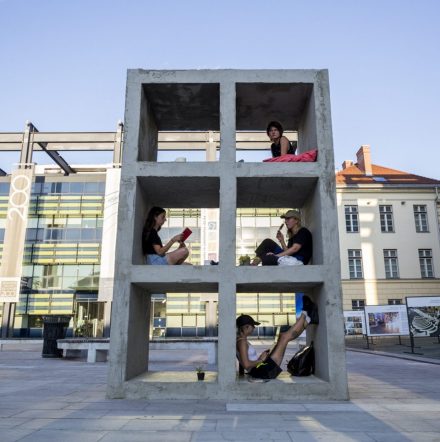 Ana Džokić and Rok Ramšak are from emerging housing initiatives in Belgrade and Ljubljana – part of MOBA Housing SCE (MOBA) – a network of pioneering co-operative housing projects from Central and South-Eastern Europe. Together, they developed a shared model for affordable, sustainable and non-speculative housing – along with the tools to turn this ambition into a reality.

Due to the widespread lack of affordable and secure housing in the Central and South-Eastern European region, MOBA Housing SCE emerged in 2017 to foster collaboration around strategies for cooperative housing development.

World Habitat has partnered with MOBA from the start as part of their Global Community-led Housing programme, including in the joint development of the MOBA-World Habitat Co-operative Housing Development Grant. This initiative specifically focused on advancing the housing co-operative approach in this region of Europe. In its first pilot, during 2020-2021, the £15000 Grant supported five proposed local projects that used a series of very different approaches to work towards community-led and affordable housing development. Let’s see how that worked out in five different contexts.

Under Serbian legislation, housing co-operatives cannot lease privately owned land, and public land is currently not available for citizens-led initiatives. Therefore, for Pametnija Zgrada Cooperative, land acquisition became a prerequisite to make a partial equity rental co-operative housing model feasible in the local context. The grant enabled the shortlisting of possible locations that fit the criteria, as well as a financing plan for the land purchase. The land search brought crucial hands-on insights on how to undertake the search and evaluation process, how to establish what constitutes an adequate location, and what’s available and its pricing in the current market. As a result, they have managed to identify several potential plots and have pre-booked one specific site for a pilot project.

With the change in the political landscape in Slovenia, the pilot housing co-operative project had come to a stalemate as the newly appointed government scrapped the new housing law required for housing co-operatives to be viable. Zadrugator Cooperative responded by using the grant to put a significant effort into promoting and advocating co-operative housing on national and local levels through an awareness and advocacy campaign. As a culmination of their activities, they have installed a Monument to the Housing Crisis in co-operation with an artistic collective “m2” in the centre of Ljubljana and managed to include housing co-operatives in an intervention law on public housing provision put forward to the National Assembly.

První Vlaštovka used the grant to engage external experts to help develop a detailed professional business plan to approach private financial institutions to finance the purchase and renovation of the property. The business plan is adaptable and should serve as a basis for other similar groups to use within Czechia, under the umbrella initiative Sdílené Domy. Thanks to securing commitment for co-financing, they went on to successfully purchase the first property that will be transformed into a housing co-operative and a social centre based on the co-operative rental model.

Currently, no laws and financial instruments support the establishment of housing co-operatives in Croatia. To bridge the gap, Zadruga Otvorena Arhitektura/ZOA decided to use the grant to involve legal, real estate and construction experts in creating a step-by-step strategy for local governments to kick-start the development of a co-operative housing model. To get a step closer to proposing the model to the city of Zagreb, ZOA mapped out city-owned plots of land suitable for the construction of co-operative housing and developed three conceptual architectural projects and related financial models.

As well as supporting local projects, the grant has increased the network’s capacity to support its members. In fact, funding was provided from World Habitat to MOBA, who created a collaborative grant-making system for its membership to channel tailored financial support for local projects. This came with a package of support with discussions on how to improve proposed projects, channels for feedback and peer-to-peer exchange on progress and achievements. In the words of Rok Ramšak from Zadrugator: ‘Let me tell you what I love about MOBA’s grant system: the groups don’t compete for funding, they help each other improve and deliver each project’.

Given the success of these first experiences, a second round of the MOBA-World Habitat Co-operative Housing Development Grant was launched in late 2021 with approximately £20000 to advance on aspects such as membership engagement and training, researching technological and sustainable solutions, and policy development. The grant management system will also be improved with the aim to grow and support more pioneering community-led housing initiatives in Central, Eastern and South-Eastern Europe – where sustainable and affordable solutions are greatly needed.

To hear more about how you can connect with or support MOBA Housing SCE, please email: [email protected]