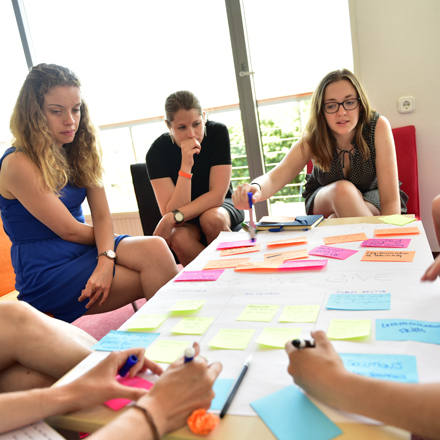 As I start my new role as Programme Officer at World Habitat working on the European End Street Homelessness Campaign I reflect back to June 2017 on my intense week of learning at the FEANTSA Youth Study Session: Housing First for Youth, in Budapest.

On a sunny Sunday in June I arrived in Budapest full of intrigue to begin a week of discussions focusing on how we can implement Housing First for young people. The week was run by FEANTSA Youth who aim to increase awareness of youth homelessness and to promote young people’s knowledge and views on homelessness at a European level.  The week brought 40 people together from across Europe who are currently involved with tackling youth homelessness. We used this as an opportunity to learn from each other about Housing First youth projects already underway and discussed how by working together we could create more momentum for change. I found it really insightful talking with some of the participants who had experienced homelessness themselves and now work to end it.

There was a real excitement from everyone to learn from each other and find out more about how we could build momentum together. Participants came from many different backgrounds yet we all shared similar frustrations. These included that there is too much difficulty getting those in power to recognise the need for Housing First and in some cases the basic idea that having a home is a human right. Participants from Poland, Serbia and Slovenia explained the struggle of even getting homelessness recognised as a problem. Hearing this gave me a sense of hope that at least this wasn’t one of the issues for Western Europe to overcome on top of everything else. After a busy week of activities and discussions we all believed and felt empowered that Housing First, including for young people, can happen in our respective countries.

Despite this week being called a ‘Study Session’, it was really fun and interactive. We even had time to become ‘journalists’ presenting our stories on what we thought the issues around homelessness were for our home region. Although I work on homelessness across Europe through the European End Street Homelessness Campaign I was placed on the UK and Ireland team for this task. We created an excellent front page of our imaginary newspaper the ‘Stigma Times’. Our front page focused on the issues of a lack of affordable homes, a lack of state funding for resources and a lack of political understanding and will for Housing First.

During the week we discussed what Housing First for youth meant including how it differed from the general definition of Housing First. It became even clearer that young people have different needs mainly due to the fact that they are at a different life stage. Yet, it was clear that Housing First can still work for them, with the right support and tactics in place. We were very lucky that we were joined by Steve Gaetz, an academic from Homeless Hub Canada, and Melanie Redman from A Way Home Canada who inspired us with Canada’s effective collaboration to tackle youth homelessness. They both prioritised the idea of ‘Collective Impact’ where relevant organisations from different sectors get together to think about how they can end issues of homelessness as one. For me this is something that really stood out as it seems that there is often a lack of willingness for people outside of the homeless sector to work on homeless solutions. Yet, homelessness is not just a housing issue and this brought into focus the need to ensure that the issues behind it are considered.

As the week progressed we heard from other great participants involved in ending youth homelessness in their countries. Ali Calder, the Head of Services at Rock Trust in Scotland, shared her story of how attending a previous FEANTSA Youth session had inspired her to launch a Housing First for youth programme in Glasgow, which is due to begin in Autumn this year. A similar story came from Lisa O’Brien of Focus Ireland, where two Housing First for youth projects are currently operating.  It was good to hear such positive stories about how Housing First can work so close to home, two countries we can definitely learn from back in England.

As the week came to a close we realised with sadness that we would soon be back to our day jobs and out of our inspirational Housing First bubble! We began to think about how we can work together to end homelessness and specifically youth homelessness. The huge diversity of participants and our different experiences, from social work to campaigning, means that we now have a group of friendly faces we can get in contact with for help in our own projects or if we need an inspiration boost that change can happen.

The momentum gained in the week will now continue through ongoing knowledge exchanges and joint actions and I am very grateful to have met and worked with so many fantastic people wanting to make a change. It became clear as the week closed that half of the battle to ending homelessness is the belief that it is possible. This week gave us the belief, so let’s do it!