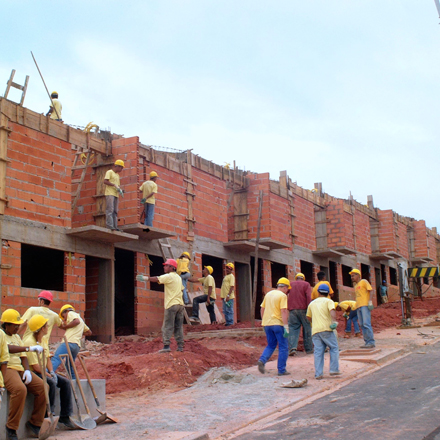 Pablo Caballero is the former Secretary-General of FUCVAM and is currently a Board member of FUCVAM’s School of Cooperatives: ENFORMA.

Here in Montevideo, South America, this Sunday gifted us with an afternoon of sunshine and blue skies. Sitting in my old armchair opposite our housing co-operative, I got to thinking about how small and yet how vast our world is.

Our co-operative started 49 years ago as part of the Uruguay railway workers union. It is an example of how the co-operative movement was born in our country: as a collective, participatory way of solving the issue of people’s right to access housing. It’s clear that this collective approach has brought so many positive results in the five decades that have passed – more than 600 co-operatives have been established throughout the country with 23,000 families enjoying decent housing, and a model that has been exported to over 14 countries across Latin America and the Caribbean.

One of the co-operative movement’s main foundations is considering housing to meet people’s needs, in a place where people can flourish rather than as a commodity to buy and sell. That is why co-operatives in Uruguay are mostly owned collectively and not by private individuals.

As in most parts of the world, this vision clashes with the capitalist idea of housing, where you get it if you can afford to buy it. With the Uruguayan model of co-operative housing, no-one borrows funds nor has the necessary savings – we make our contribution by working as labourers in the construction of our houses. We call this ‘mutual aid’.

This, together with self-management and participatory or direct democracy, forges human bonds based on collaboration and solidarity with the goal of developing new communities.

Because, ultimately, that is what a co-operative is: the creation of human connections based on mutual collaboration, equality and collective work.

Creating links based on respect and affection is the path to a more caring world. This is what led the Uruguayan co-operative model to win a World Habitat Award in 2012 for transferring our model to other countries. This meant that in a globalised world, the good practice established in Uruguay became known internationally.

This continued when, in September 2013, organisations in Africa and South America carried out a Peer Exchange with residents of our co-operative in Uruguay. This helped to empower people from a wide range of places to believe that they too can adopt this idea, to adapt it to their individual contexts and ultimately achieve decent housing.

While thinking about this, I recall my visits to La Borda in Barcelona; Chamarel Les Barges and Le Village Vertical in Lyon; the co-operatives of Geneva, Berlin and Cochabamba in Bolivia; the hot plains of Paraguay and the re-birth of co-operativism in Mexico – thanks to the Guendaliza’a and Yelitza co-operative members.

Through each of them I gained experience in advocacy work to obtain land banks, favourable legal provisions or state funding to develop public policies for the most vulnerable groups.

I know that new experiences are now being developed in Eastern Europe: including in Budapest and Vienna.  And I know they’ll achieve their dream if they create the positive human connections which are so essential.

The world is vast when we look at it as an individual – each of us in a little village, trying to solve our problems alone. But the world becomes very small when we share our dreams, concerns and experiences while searching for solutions and while searching for a different world.

Let us learn to love shared work and collective effort. Let us continue dreaming in the knowledge that through participatory housing there lies a possible way to achieve those solutions for a different world.

3 hours ago RT @PatrickDuce: How do we frame the climate emergency and homelessness in the same conversation and with the same urgency? How can we av…

22 hours ago 🔦Across Latin America an estimated 120 million do not have access to a bathroom. #WorldHabitatAwards winner… https://t.co/AYZxYUMb1m