Home / News / Our Blog / A lesson in rebuilding and resilience

A lesson in rebuilding and resilience 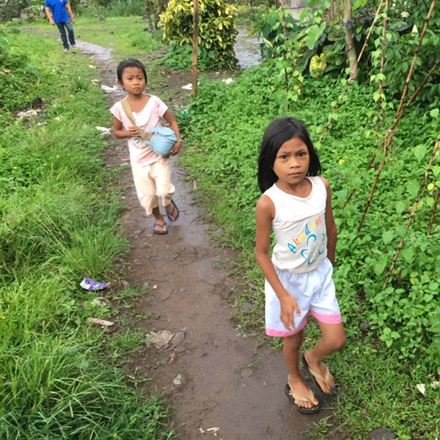 In October 2017, I visited various communities in Tacloban, Philippines to see the Post-Haiyan Self-Recovery Housing Programme. This was one of the visits that took place to help decide the winners of the World Habitat Awards 2017. The programme coordinated by CARE Philippines helped people in remote areas of the country rebuild their houses after they were destroyed by the super- typhoon Haiyan in 2013. Haiyan was the strongest and most destructive typhoon ever recorded. Instead of relocating people or building new houses, this programme provided kits and training so that people could rebuild their own homes. The project helped 15,500 families rebuild their homes.

After our 24-hour journey from the UK we arrived into Tacloban airport on the island of Leyte in the Philippines. The airport was fully functioning with frequent flights in and out of the island but what really struck me was the airport building – it was slightly damaged and looked under construction. It symbolised exactly what had happened to this area of the Philippines following the biggest typhoon to hit the world.  They had bounced back, they hadn’t let Haiyan defeat them but there were stark reminders of what had happened. 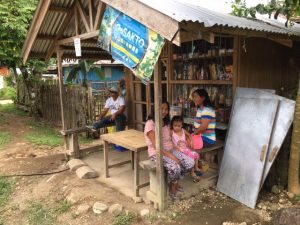 We were picked up by CARE Philippines who took us to our hotel into Tacloban centre. On the journey we got to see the context, the roads, the buildings – the whole area. There were lots of people, lots of children and houses that doubled up as people’s livelihoods such as shops.

Significant places were pointed out to us – like the sports stadium which had been selected as a safe place for people to go to during typhoon Haiyan. However, the surge was so powerful that it caused massive flooding leading to drowning. I started to understand the unexpected and unpredictable force of Haiyan. Everyone had been vulnerable to its powerful forces. 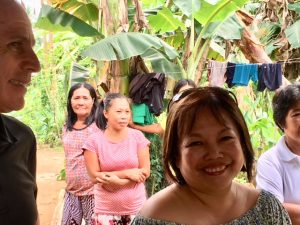 I really got to understand the impact of Haiyan through the time I spent with a lady called Minet. Minet is a mother, a grandmother, a friend to many people. She loves singing. She loves people. She loves life. Minet works as the Executive Director at LCDE, a disaster response non-government organisation. They were used to dealing with disasters and had prepared for the typhoon, but they did not expect the mass destruction Haiyan caused. Minet was from one of the many organisations that worked with CARE to help thousands of others get back to some sort of reality. She was on the ground in Tacloban working in partnership with CARE to distribute toolkits, food and advice to communities affected by the typhoon.

She had lost her home. She had lost her office. She had seen complete devastation to the place she called home. She slept in a make shift tent whilst the rebuilding of her home took place. But she helped other people build back their lives. This gave her empowerment at a time when she felt so fragile. It’s people helping people.

During my visit to Tacloban I got to meet the communities who benefited from the CARE Philippines programme, one of which was located in rural mountains. It was the longest steepest drive I have ever been on. For me it felt like these people were a million miles away from anyone else. They were a community very hard to reach even in good weather. However, Minet knew this community from her everyday work so she knew even straight after Haiyan that these people could be reached and helped. The landslides and typhoon damage meant that this community needed the support from CARE to be able to eat, bring up their families and rebuild their homes. 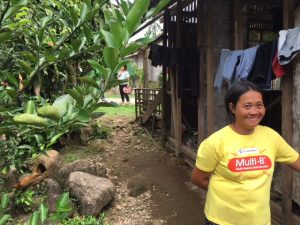 Minet and her organisation is an example of why this project is so innovative. CARE had enabled local people in the know to react quickly and help create better housing by training communities to build back their houses safer. And the project continued to help people after the houses were rebuilt. Communities received livelihood assistance. This has been used in different ways by different communities. In one village where almost all the villagers worked in rice farming the funds had been combined to buy a rice mill.  This enabled them to make more money from the rice they grew. In other villages funds were used to provide further education for young people.

We were told that without help, communities would have rebuilt their own homes, but they would probably have done it more slowly, been less safe and poorer as a result.

I was so inspired by the positivity and resilience of the people living in Tacloban. Losing everything had meant they needed to rebuild everything. These people haven’t just rebuilt a make-shift house, they have created homes, lives and a future for all. They have also shown that there is a solution to a severe problem. And I am sure they can inspire people everywhere!