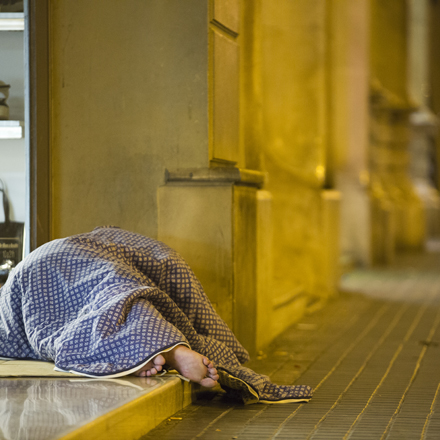 Sekou* first came to Europe 15 years ago to buy clothes, which he planned to take back to his home country of Guinea and sell. He waited at the airport where his cousin was meant to meet him, but he never showed up. Sekou wasn’t disheartened. At home, an unstable political situation meant that making money wasn’t safe or easy. So, seeing the kind of life that he could create for himself in this part of the world, he decided to stay and find work. He travelled far and wide, from Germany, through Switzerland and Italy to finally settle in Spain. He worked hard to house, clothe and feed himself, but without papers it was a struggle. He tried to get legal status, but time and again was faced with hostility and repeated “NO’s” from officials. After the financial crisis hit Spain, work dried up and suddenly so did the money that Sekou had managed to save. He lost his house and one year ago found himself sleeping on the streets.

Now, as he sits in front of me, his bed is a urine-stained mattress which he found in a nearby skip. When I approach him and ask if he would be willing to speak with me his large obsidian eyes glimmer and wrinkle in the corners as he breaks into a wide smile. I crouch down on the pavement, but he beckons me closer, moving his hoodie out of the way, welcoming me to share his space. He’s eating something out of a small plastic tray. It looks like a bit of processed chicken. I ask where he got it, and he explains that he found it when he was looking for the mattress. He asks me if I want some, but I politely decline. I have a set of formulaic questions written down in front of me, but I don’t need to ask them. He tells me his story in his own way. The ups and the downs, the adventure and the fear.

After 15 long years, Sekou still hasn’t managed to get anywhere close to securing residency and is now stuck in limbo. His lack of papers means that he can’t access state help, he can’t find work and, even if he wanted to, he can’t afford a plane ticket back home. It’s intriguing and inspiring. But mostly it’s incredibly sad. And what touches me the most are the small acts of kindness that he shows me. That mattress is his sanctuary for the night and he’s not sure where his next meal will come from, yet he does not hesitate in inviting me to share them with him.

Sekou is one of 322 people sleeping on Barcelona’s streets who spoke to myself and 350 other volunteers on one night during Connections Week. 508 more people were found but declined to speak. Every single person’s story is unique, but Sekou is not alone in his struggle. I met a young man with severe mental health problems, whose mother has similar issues and father is an alcoholic. He’s been living on the streets for eight years now. Another man’s relationship breakdown led to him losing his home. He still works but his wage doesn’t cover rent and he is unable to access housing benefits.

We often disengage ourselves from the human face of homelessness because that way it is easier for us to accept.  But these are real people, with real lives, pasts and futures, and genuine emotions and experiences – as valid as our own. In inviting them to share their stories, giving them the time that we give to our friends and families everyday, we create a human connection.

We need to show people living on the streets that their voices are valued, that their narratives are worth listening to and that their struggle is not theirs alone. This is a human disaster which is neither inevitable nor acceptable and it’s up to us to do something about it.

*Name has been changed